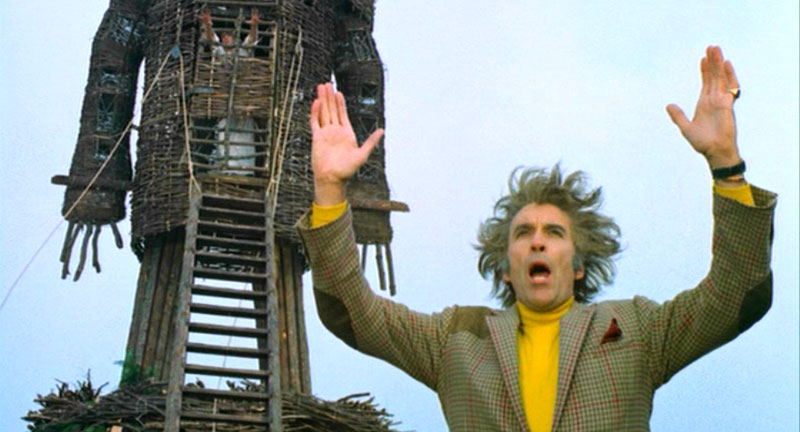 An effective horror movie comes from learning that it isn’t just the excessive blood that makes people squirm. It is the atmosphere. Sure, galleons of gore, pus and body parts cause weak stomachs to churn accompanied by that terrifying feeling when watching organs that are supposed to be kept inside your body, spill out so prolifically on screen.

However, what effectively makes a riot of a horror movie become chilling is the suspense and tension Director Robin Hardy creates  so seamlessly with The Wicker Man that, alongside other 1970’s classics (The Omen and The Exorcist), has haunted cinema ever since.

The Wicker Man is set on the Island of Summerisle, off the coast of Scotland. Mainland Inspector and devout Christian Howie is called to the island to investigate the disappearance of a young girl named Robin. However, after arriving, he finds that the locals are more than just a tighty knit community and the more he conducts his investigation the more the people fight against him. When no one professes to know who Robin is and unearthing their following of Celtic Paganism, Howie finds himself further down the rabbit-hole and deeper within a shocking plot.

The Wicker Man has been dubbed “the Citizen Kane” of horror movies and interestingly, doesn’t use cheap tricks or horror tropes to incur fright from the audience. Instead, it is the blind journey that Howie has taken and the increasing danger that strips us of our safety. Hardy does this fantastic job of getting the tale told and letting it crawl across your skin. It is tense, filled with all these characters that are leading Howie through a maze and the more Howie gets frustrated, the more terrified we become. ‘

If you have seen The Wicker Man, you will know that there are iconic scenes that will stand up in memories, a Wicker shadow on a bleak sunset. The ending, for example, is truly disturbing, as Howie is burnt alive with the cultists dancing around them. It really levels the problem that wrongly entrusting religion could destroy all you know. Whether it is Howie and his devout Christianity or the Islanders’ insistence that murdering this virtuous man will bring them foods, there are clear connotations that mob rule or extreme faith can be damaging. You only have to see a man screaming prayers as he is burnt to death or a Celtic song sung so jollily as a man dying, for this message to come through.

Towering above this is some incredible acting. Edward Woodward is terrific as a man who is pushed to the edge and his constant determination for what is right and to save a girl is earnest and near painful to watch. And complimenting him (or, to use a better term, contradicting him) is Christopher Lee. In one of his most powerful villainous role as Lord Summerisle, Lee is calm and intelligent who, almost snake like, sneaks his murderous plan in. He perpetuates this brainwashed community and leads them against the norm.

What Hardy has created is a movie that is more horrific than ever. Instead of creating a supernatural beast or a slasher movie, it is an exploration into human will, faith and the lengths we will go to to protect all we know. It is haunting because it has echoed across the decades. Its message is this: true fear is that people will do anything to protect their beliefs.

And the dread is that it speaks louder today than it ever did.

In this article:The Wicker Man