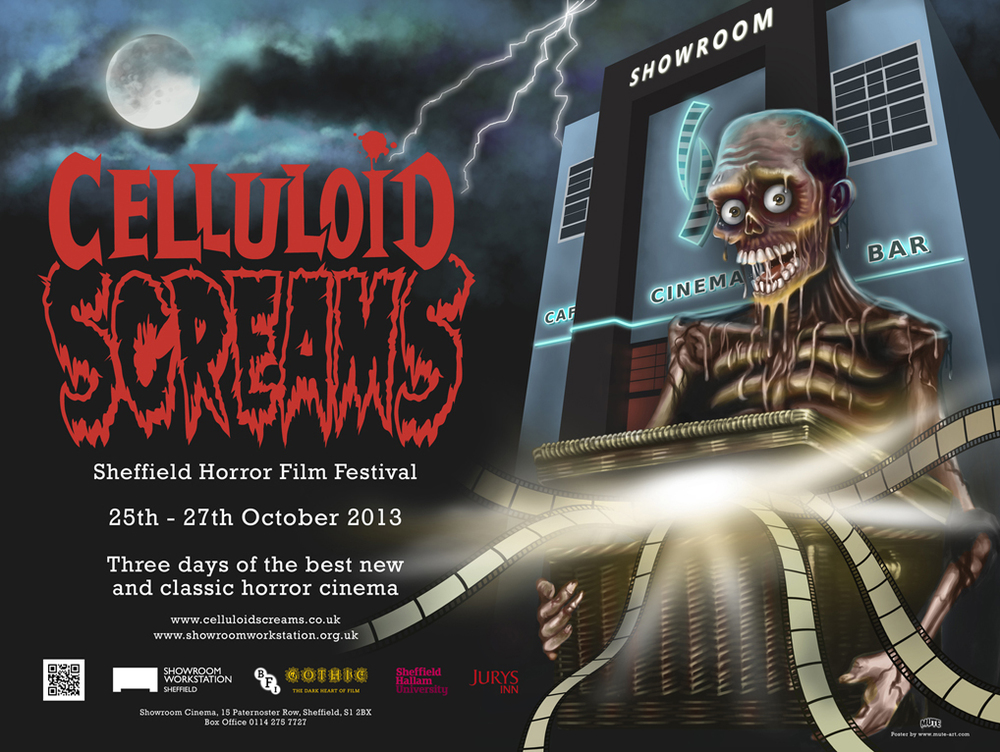 Horror came to Yorkshire between the 25th and 27th October when The Showroom Cinema in Sheffield hosted Celluloid Screams, the steel city’s very own horror film festival.

This year saw the festival grow even bigger and we were there to enjoy every blood-soaked minute. Festival Director Robert Nevitt put on an incredibly strong lineup this year which included the hallucinatory horror comedy Motivational Growth, a twisted vampire love story with Chimeres, a lesson on how to survive a zombie apocalypse in The Battery and the ultimate revenge film Big Bad Wolves.

The guest list for the festival was just as impressive. Directors Don Thacker (Motivational Growth), Lee Hardcastle (ABCs of Death), Oliver Beguin (Chimeres) and Dominic Brunt (Before Dawn) all made an appearance and took part in a Q&A for their films. Jen and Sylvia Soska (American Mary) also made an appearance via recorded video message to judge the Twisted Bumper Competition and there was also an appearance form the guest of honour Frank Henenlotter, the director of the genre cult classics Basket Case and Frankenhooker.

This year saw the return of the Celluloid Screams secret film. Last year it was Ciaran Foy‘s terrifying Citadel and this year we had Almost Human, a sci-fi horror movie about a man who is abducted by aliens to return as a blood thirsty killer. As if that wasn’t enough, Celluloid Screams held its very first allnighter called Night of the (Un)Dead featuring exclusive 35mm presentations of Frankenhooker, Return of the Living Dead, The Beyond and Demons (which replaced Braindead).

It was Renaud Gauthier’s 70s inspired Discopathe that brought Celluloid Screams to a thrilling climax. So, after three days of some of the best films that the horror genre has to offer it was announced that Aharon Keshales and Navot Papushado‘s Big Bad Wolves won the audience award for best film and Fredrick S. Hana‘s Angst, Piss & Drid was awarded the prize for best short film by the jury.

So with the festival over for another year it is time to thank Rob and his team for a brilliant weekend. We will certainly be there next year but for now here are our top five films from the festival.

Directed by Renaud Gauthier and starring Catherine Antaki, François Aubin, and Sandrine Bisson, Discopathe is a throwback to the ’70s. It follows a timid young New Yorker who finds himself unable to control his murderous impulses after he is exposed to the pulsating rhythms of disco music. Complete with a killer ’70s soundtrack the film plays with its tongue firmly in its cheek and enough blood splatter to keep gore fans satisfied.

An enjoyable slice of southern gothic, Jug Face is directed by Chad Crawford Kinkle with a fantastic cast including Sean Bridgers, Lauren Ashley Carter, Larry Fassenden and Sean Young. Telling the story of a small backwood community ruled by a creature in a pit, pregnant teen Ada is forced to do whatever it takes to escape when she learns she is next in line to be sacrificed to the creature. With believable performances from its stella cast, Jug Face is a prime example of gothic storytelling done right. Both beautiful and harrowing we strongly recommend this movie.

Announced as the 2013 secret film, Almost Human is  the feature debut of Joe Begos who directed and wrote the film. A throwback to ’80s horror, it tells the story of Mark Fisher (played brilliantly by Josh Ethier). After disappearing from his home in a brilliant flash of blue light almost two years ago Mark returns a changed man, leaving a string of grisly, violent murders behind him. It’s up to his friend Seth and his ex-girlfriend to stop the evil inside of him. Almost Human is a back to basics ’80s homage packed to the brim with blood with lots of practical FX and a decent story at its core.

Don Thacker’s comedy horror about a mass of talking fungus opened the festival. Starring Adrian DiGiovanni, Danielle Doetsch and featuring the voice talents of genre legend Jeffrey Combs, Motivational Growth tells the story of a man depressed with his life that finds himself taking advice from a growth in his bathroom after a failed suicide attempt. With The Mould’s help, he manages to improve his life but its not long before he realises that the help he has been getting may not be coming from good intentions. Supported by an 8-bit soundtrack, Motivational Growth delivers an equal balance of horror and humour whilst grossing you out with its FX.

Clearly my favourite film of the festival was Jeremy Gardner’s The Battery, telling the tale of Ben and Mickey, two former baseball players as they cut an aimless path across a desolate New England that has been torn apart by a zombie apocalypse. In order to survive, they must overcome the stark difference in each other’s personalities, but when the duo intercept a radio transmission from a seemingly thriving protected community the boys will stop at nothing to find it. Made for just $6,000, The Battery is not just a character driven survival horror film but it is a prime example of how to create a professional looking movie without breaking the bank. Wonderfully written by Jeremy Gardner who also steps up to play one of the leads along with Adam Conheim the film is a must-watch for any horror fan looking for something different to your average run-of-the-mill zombie movie.

For more information about Celluloid Screams and to read about the films that were shown over the course of the weekend you can check out their official website (www.celluloidscreams.co.uk).

In this article:Celluloid Screams, horror