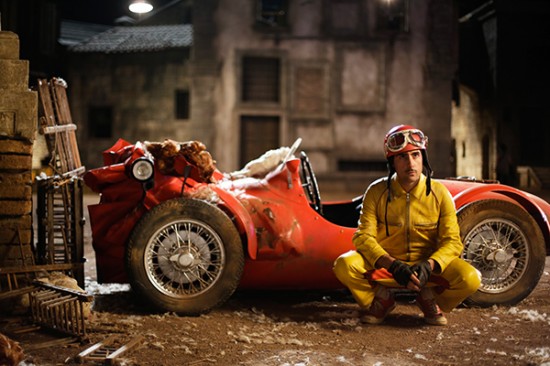 It is only a few months til Wes Anderson returns for The Grand Budapest Hotel. Luckily, for those who admire or love Wes Anderson’s work, sponsored by Prada, he has released this little short; Castello Cavalcanti. Starring Anderson’s favourite Jason Schwartzman it focuses on an American racing car driver who, during a midnight race, crashes into a small village called Castello Cavalcanti. Turns out, this is the village of his ancestors and, as he tries to get back to his hotel, he is unearthing some faces he has only seen in movies.

The lead up to The Grand Budapest Hotel is exciting for some and tiresome for others. The kitsh indie director Anderson has found a home in his beautiful and quirky tales. Here, in Castello Cavalcanti, it feels more like an introduction to something bigger rather than a stand-alone short, ignoring the fact that it could potentially just be one big advert. It is familiar Anderson territory and those who do not want to tread, don’t. It boasts the same style, storytelling and Schwartzman.

But for those who enjoy his work, this new micro movie or vignette (the sense of more to come is rife here), it is stunning and intriguing. Saturated in these beautiful colours and boasting some epic camera angles, it has enough to carry its own weight. And though, at first glance, the ending feels without completion, if you look again you’ll see; it is someone who allows fate to crash into him and accepts that there is much more to his grounded state than he first thought, allowing to connect with his roots. As a fan of Anderson’s films, it mirrors his poetry well.
Still, on the road to The Grand Budapest Hotel, let us hope there are more pit stops along the way.