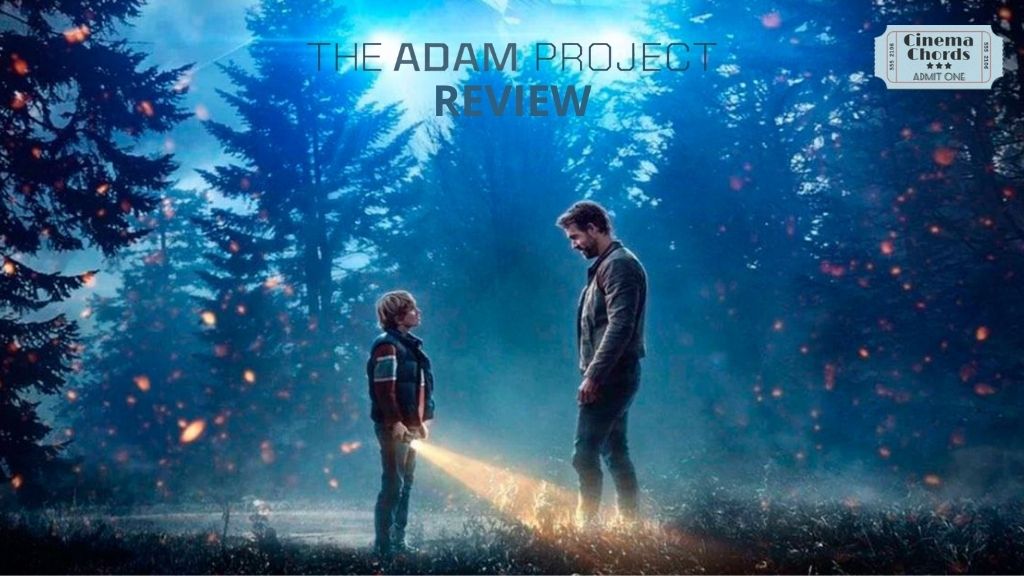 Synopsis: A time-traveling pilot (Ryan Reynolds) teams up with his younger self (Walker Scobell) and his late father (Mark Ruffalo) to come to terms with his past while saving the future.

We needn’t waste any time getting down to business with this one: Helmer Shawn Levy (Free Guy, “StrangerThings”) and co-writers Jonathan Tropper (“Banshee”), T.S. Nowlin (The Maze Runner saga) and Jennifer Flackett & Mark Levin (Journey to the Center of the Earth, Wimbledon, Nim’s Island) have crafted a fam-friendly blockbuster for the ages that meticulously crams in equal parts bombastic sci-fi action, candidly self-aware humor and heartfelt homages to classic ’80s Amblin tent-poles.

Ryan Reynolds is hands-down the most prolific actor right now – and one with virtually no duds to his name; at least in this writer’s book. This new project finds him back in the saddle with his Free Guy director and, as much as I loved that film, The Adam Project makes for a much more complete package, and it’s also great to see Reynolds cast in a role that’s slightly removed from his usual outings, without neglecting his trademark off-the-cuff, deadpan sense of humor.

That said, newcomer Walker Scobell is the real revelation here, putting in a performance that is sure to mark him out as a top-tier talent to watch. Unsurprisingly, he’s got another mega-production on the way, starring alongside Owen Wilson in the Jerry Bruckheimer-produced Secret Headquarters. The fledgling actor jumps in feet-first, putting in just as unprecedented a performance as his older self in the film, Reynolds. It’s staggering to think he’s so new to the game, as he mimics Reynolds’ signature quippiness and demeanor down to a tee, without ever overplaying it as if he were a 42-year-old trapped inside a 12-year-old’s body.

The film’s action set-pieces tick off virtually every generic pleasure box in the book too, with some outrageously over-the-top and flawlessly choreographed action set pieces that play out to the beat of a Guardians of the Galaxy-esque mixtape. It would be remiss of me not to mention Zoe Saldana whose bad-assery particularly shines when it comes to these segments of the movie. Much of the film’s fast-paced action pays an unabashed tribute to iconic sci-fi action flicks (especially Return of the Jedi), but the tongue-in-cheek, self-awareness of that very fact makes any similarities all the more rewarding, and Levy spins each homage with his own particular twist to keep his audience in its element.

And just when you think things couldn’t get any better, once Adam’s father, played by Mark Ruffalo, gets some quality screen time, his addition to the already potent chemistry between Reynolds and Scobell makes for a trio made in sci-fi hijinks heaven. At its core, The Adam Project may be a high-octane sci-fi action-comedy, but the Ruffalo/Reynolds/Scobell dynamic results in a film that packs that much more heart than most movies of its ilk, addressing themes of grief, parenting and making every second on this planet count – all of which is scripted with inspirational nuance and delicacy – never coming across as overly preachy and always relevant to the narrative.

The Adam Project is exactly the riotous romp you’d expect from another Levy/Reynolds collaboration, but this time around the extra work put in to make sure the film tugs on its audience’s heartstrings in much the same way that Amblin’s early classics did in the ’80s is far more apparent. The end result is a compelling and wholly relevant film guaranteeing that viewers can’t help but relate that much more with the characters, the playful humor and narrative as a whole, leaving you with so much more to mull over than your average family-oriented blockbuster.

Simply put, The Adam Project is a rare example of an ode to ’80s Amblin greats that truly captures the charm and appeal of those “timeless” classics. It’s a film that everyone needs to see, especially in these trying times, providing 100 minutes of much-needed diversion and delivering a wealth of heartwarming and invigorating messages that we could all benefit from right now.

The Adam Project will premiere on Netflix on Friday, March 11, 2022.