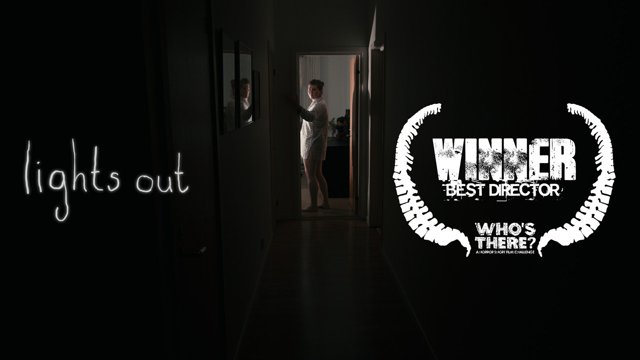 Even at the age of 25, I find it impossible to walk from downstairs to upstairs with the lights completely off. Perhaps it’s from taking one too many punches with horror movies and their “darkness is full of murders” attitudes. Or maybe it’s because I am a bit of wimp. But if you don’t launch yourself up the stairs the minute you flick the living room lights off. Or lunge across the landing for your mid-morning piss, then you are a braver person than I am.

Lights Out a film by David Sanberg and Lotte Losten was the first film to crop up on a somewhat haphazard Google search. Written for B Horror Challenge Who’s There? this is a two minute effective short that spooks you during the daylight as well as the night. A woman turning off the light to turn into the bed sees a figure at the end of the hallway every time she flips the switch…..

The idea is really simple and that’s probably why it is effective. Playing on a fear that everyone experiences, unless you are Chuck Norris, Sanberg and Losten cram a lot of terror into a handful of minutes. The slight shadow, the unnerving way it doesn’t move and that “less is more” aspect allows little claws of fight to scrape down your back. As the small jolts and jumps build, the film becomes ghastly. Lights Out keeps that element of fear as a residual effect from childhood of monsters in the shadows, lights that are saviours and that ultimate hero – the blanket. It’s a small but it will make you shit yourself. Not one to watch before you go to bed.

You’ll be rocketing up the stairs in the quickest way.