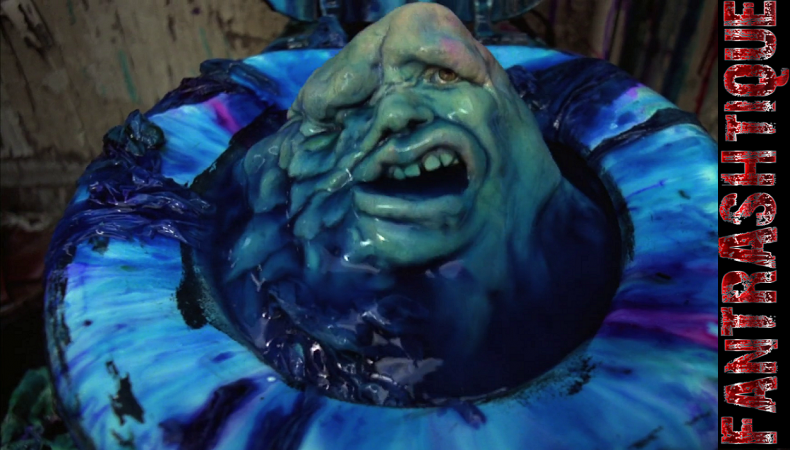 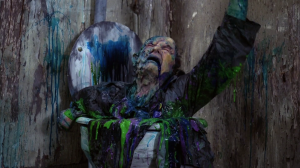 I suppose I should start this article off with an explanation of what FanTRASHTique is. Basically, it’s an ongoing feature where I watch awful, awful films, as suggested by my editor or Cinema Chords readers, or more specifically, films that are so inconceivably bad that they’re actually quite good. I go in blind each time knowing completely nothing about the film. I watch it, then write this up with the verdict of whether it’s FanTRASHTique, or just plain … trash.  Well, let the suffering begin. We’re starting with Street Trash (1987), a film I knew absolutely nothing about at the time.

Street Trash is about filthy, filthy hobos and their constant war for supremacy in the streets of…not sure? I’d tell you the characters’ names, or actors if they were relevant, or if I actually knew them. For the sake of hilarity (or more likely my own convenience) I’ll use nicknames.

Shabby Hobo is stressed because his brother, Mini Hobo doesn’t talk to him as much since they both became homeless. Meanwhile, Shabby Hobo goes to the local boozery and buys the finest liquor he can, for the astounding price of 1$. What the chubby bearded shopkeeper sold him is an old unknown liquor he found in his mouldy basement, known simply as ‘Tenafly Viper’. His booze is stolen by another hobo, who promptly melts and dissolves down a toilet bowl. Some bums play a fun game of catch-the-dismembered-penis. Meanwhile, Shabby steals an Italian Mafioso’s date, violates her in the junk yard, then leaves her to fend for herself, as she’s horribly gang-raped and killed by street-bums. Detective Tough-As-Fuck takes the case, shaking down the local street trash for her whereabouts. As more and more drink the dreaded liquor, the hobo population begins to dwindle…

A messy synopsis, but rather suiting for a film with about 5 narrative sub-plots, and an improperly planned storyline. The melting deaths are both hilarious, but rather horrifying too (don’t worry, that why we include images). The whole thing is just indescribable. You have this main storyline of this heroic hobo, who mainly just does things for his own want. There’s no real build, as it ‘builds’ up to a confrontation with Vietnam flashback Hobo, for no apparent reason. Meanwhile between these horrifying visual deaths, and seemingly unrelated character events, there’s a Mafia sub plot involving a tough chinned cop and a not-very-Italian Italian man. Again, for seemingly no reason. Not to mention the gang-rape that comes out of literally nowhere. The conversations are also pretty garbled and non-sensical, except for the occasionally golden line of dialogue.

Street Trash is a truly terrible film, and I can only recommend you BUY IT RIGHT NOW AND DON’T LOOK BACK. I’m dead serious. Street Trash is a fantastic film, and a true tome in cult cinema, that everyone MUST see. It’s hilarious, comically bad, captures the entirety of ’80s film-making in about two hours, and I really can’t do it justice. It’ll amaze, appal, astound, and it may possibly be one of the best (WORST) films of all time. Watch Street Trash (MORE LIKE SWEET TRASH), and tune in next time for another edition of FanTRASHTique.

We’ll leave you with the original trailer and also the rare original short film it was based on to whet your appetite for this masterpiece. Be sure to follow this section on Twitter @FanTRASHtique where we’d love you to recommend which bargain basement movies you’d like to see us cover here.

Sam Thorne is a freelance film journalist, critic, feature writer, and news writer. His speciality is primarily anything psychological, edgy, or dark. Sam writes for a variety of internet publications. Also a Film and TV Studies BA Student..
You might also like
Features