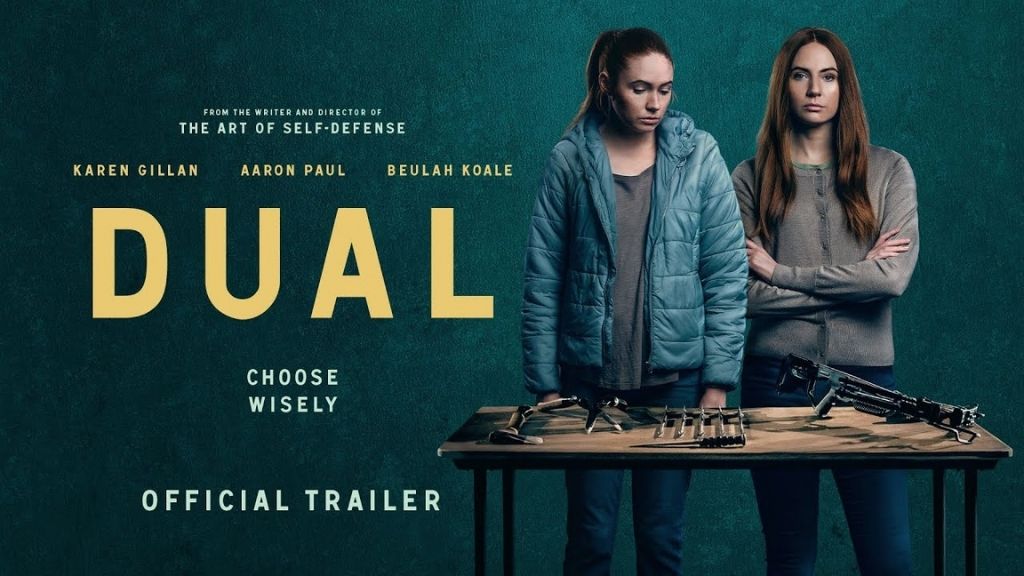 The only thing that can stop you is you.

RLJE Films has revealed Karen Gillan’s duel to the death in the trailer premiere of Sundance Festival favorite, Dual.

The film stars Karen Gillan (Guardians of the Galaxy, The Bubble), Aaron Paul (“Breaking Bad,” The Last House on the Left), and Beulah Koale (“Hawaii Five-0,” Shadow in the Cloud) and was written and directed by Riley Stearns, who made quite the name for himself on the festival circuit with his short films, most notably 2013’s The Cub (which you can watch in full here), before going on to direct the wholly inspired genre features Faults and The Art of Self-Defense. Stearn’s latest endeavor focuses on Sarah (Gillan), a woman who, when given the news that she is terminally ill, resorts to a cloning procedure in the hopes of alleviating the loss for her friends and family. When she suddenly makes a miraculous recovery, her attempts to have her clone decommissioned fail and lead to a court-mandated duel to the death, giving her one year to train her body and mind for the fight of her life.

Commenting on the film, Stearns said: “Shooting Dual with XYZ during a global pandemic will forever be an experience I look back on with a tremendous amount of pride. I’m beyond thrilled to enter the next stage of this journey with the team at RLJE Films and I can’t wait for audiences to see a film which we all deeply care for.”

RLJE Films will release Dual in theaters this April 15 and in the meantime, we’ll leave you to watch the official trailer.