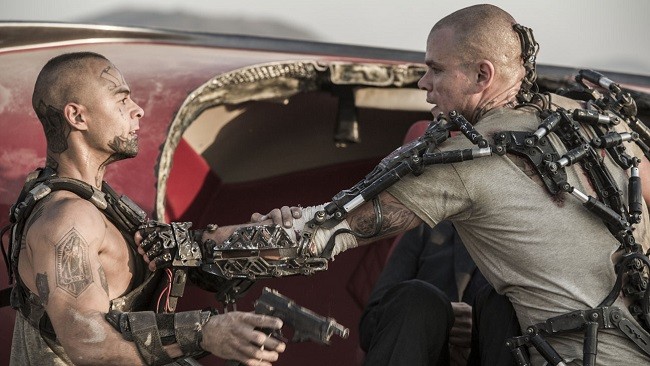 Neill Blomkamp’s a busy man. After splitting apart the sci-fi genre with his 2009 hit District 9, mixing an alien-themed premise with the cinéma vérité style, the South African-born director proved himself to be one of the most fascinating new talents in the business. His experimental approach meant that District 9 not only contained impressive SFX but boasted a gripping plot to boot, whilst discreetly making a poignant point or two about immigration. His long-awaited second feature, Elysium, hits cinemas on Wednesday 21st August. Set in 2154, the film depicts a ravaged, overpopulated Earth in which richer citizens, for their own protection, inhabit an isolated space station known as Elysium, and sees Blomkamp once again make innovative use of a sci-fi storyline to tackle wider political and sociological issues such as health care and class war.

At 33, Blomkamp’s already compiled a hell of a CV for himself, and with plans for a Halo film in the works as well as a feature-length adaptation of his short film Tetra Vaal, he shows no sign of slowing down. Here’s a look at some other emerging directors set to be the next generation of Spielbergs.

Sean Durkin’s demonstrated plenty of promise since the release of Martha, Marcy, May, Marlene back in 2011, which, following its debut at Sundance, made the film world sit up and take notice of both Durkin and the film’s leading lady, Elizabeth Olsen, officially labelling the pair as ‘Ones To Watch’. Durkin’s depiction of a young woman struggling to return to normality following her time with an abusive cult was greeted with rave reviews and a clutch of awards, including the prestigious Sundance Directing Award (Drama) for Durkin himself.

His follow-up was the acclaimed Channel 4 drama Southcliffe, a fictional account of a series of shootings in a small town and its impact on the town’s residents, so evidently he’s particularly adept when handling gritty subject matter, the grislier the better. Next up, a biopic of Janis Joplin portraying her time on tour during the peak of her fame. Not too taxing a topic then…

Despite the vast number of shorts she’s both penned and directed, Rees wasn’t always the director/screenwriter extraordinaire she is today. After attaining an MBA in Business Administration, Rees initially worked for esteemed ad agency Proctor & Gamble, where her primary role was to market panty liners. Ultimately realising the world of marketing underwear wasn’t for her, Rees enrolled in NYU’s graduate film programme, and became fast friends with Spike Lee, who mentored her for the course’s duration. Her first feature, Pariah, a hard-hitting coming-of-age story about a Brooklyn teenager coming to terms with her identity as a lesbian, received its premiere at Sundance in 2011. Getting it there was no small victory: Rees even sold her apartment to secure funding for the film. Following its appearance at the festival, Focus Features quickly snapped it up and offered a wide release.

So now what’s on the cards for Rees? An HBO series starring Viola Davis, two more feature films Large Print and This Man, This Woman, and the Southern-set thriller Bolo – a pretty far cry from her marketing days.

After proving his mettle as a screenwriter in cult favourite Garth Marenzi’s Darkplace and securing his status as a supremely talented actor in The IT Crowd, the former head of Cambridge Footlights let the world know he’s a triple threat in 2010 with his debut feature as director, Submarine. This quirky, quintessentially-indie tale of troubled 15-year-old Oliver Tate doing everything he can to both lose his virginity and keep his mother from having an affair, is a mesmerising achievement for a first-time director. Upon its release, critics went a little bit wild, hailing it as one of the best British films to emerge in years, and citing the film’s portrayal of adolescent angst, isolation and idealism as Ayoade’s most significant achievements.

Next up for the young director is another equally peculiar dramedy, The Double. Part-inspired by the Dostoevsky short story, the film stars Jesse Eisenberg as a man gradually driven to insanity after coming into contact with his doppelgänger. Moss and Mark Zuckerberg working together is something we’re keen to see.

Film To See: Beasts of the Southern Wild

Benh Zeitlin boasts the rare accomplishment of receiving an Oscar nomination for Best Director (alongside such cinematic legends as Steven Spielberg and Ang Lee) with his first ever flick. Based on co-screenwriter Lucy Alibar’s one-act play Juicy and Delicious and adapted by Alibar and Zeitlin, Beasts of the Southern Wild won a handful of awards upon its release, was designated a 2012 “Critics’ Pick” by The New York Times and was described by Roger Ebert as “a remarkable creation… that blindsides you with creative genius.” Even Barack Obama declared himself a fan, describing the film as “spectacular” in an interview with People. Perhaps most impressive, Zeitlin made someone called Quvenzhané Wallis a household name: certainly no easy task. But it’s his intuitive approach to storytelling, and his talent for combining mythical elements with reality that’s really letting him make his name as one of the best young directors around.

With abundant praise left, right and centre, Beasts is no easy act to follow, and Zeitlin is being decidedly quiet about his next move. Whatever project lies in store, however, it’s guaranteed to be groundbreaking.

Film To See: In A World…

You might have spotted Lake Bell before, as, like Ayoade, she’s no stranger to the film industry. Having appeared as an actress in a number of films and TV shows from ER to It’s Complicated, Lake Bell appears to be breaking free of her supporting character label, and making a name for herself in her own right. In her debut feature, In A World…, Bell does the Woody Allen thing: writing, directing, and performing the main role, and what’s more, she does an extraordinary job of it.

In a similar vein to the work of Greta Gerwig and Lena Dunham depicting young women struggling to make a name for themselves in a creative industry, In a World… sees Bell as Carol, an out-of-work voiceover artist overshadowed by her father’s achievements in the same field. Bell’s performance is superb, but it’s her skill as director that gives the film its edge. Clearly taking its title from the phrase synonymous with Don LaFontaine’s cinematic catchphrase, Bell’s debut has already proved a big hit at Sundance, scooping up a Best Screenplay award and cementing the actress-turned-director-and-screenwriter as one to watch. Having spent the best part of her career in front of the camera, we’re predicting she’s got a bright future ahead of her at the helm too.

With an array of new talent like this currently coming out of the woodwork, we’ve got plenty of exciting new cinema to look forward to in the years ahead.

We’ll leave you with the extended trailer to Elysium….