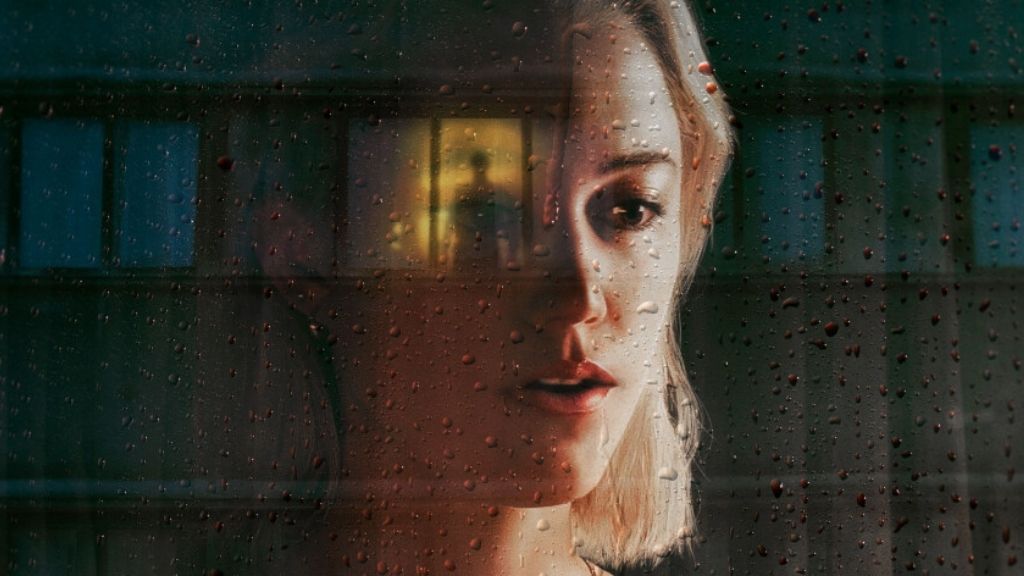 SYNOPSIS: as a serial killer nicknamed “The Spider” stalks the streets, Julia – a young actress who just moved to town with her boyfriend – notices a mysterious stranger watching her from across the street.

Director Chloe Okuno (V/H/S 94) cites both Roman Polanski (The Tenant) and Sofia Coppola (Lost in Translation) as key influences for her latest endeavour, Watcher. This writer also felt some smart nods to Rear Window in this moderately tense psycho-drama, which marks her full feature debut.

Julia’s (Maika Monroe) half Romanian boyfriend Francis (Karl Glusman) has been promoted at work, resulting in the couple relocating to Bucharest. Whilst he spends long hours at the office, dining with clients and trying to impress his friends, her days are spent alone.

Shortly after moving into their apartment, she notices someone watching her from a window across the street. Eventually, Julia waves at them to see if they are simply looking out the window; what follows is marvellously chilling, with Monroe making her sense of horrified reaction palpable to the audience. It’s a brilliantly reserved performance from an actress who continues to grow in dramatic stature, never allowing her role to become overblown or tip into histrionics – something that can be a risk with a role of this nature.

As things progress, she believes that the same man is now following her around, with Okuno admirably sustaining an atmosphere of dread and delivering moments of fear from the most mundane of things, such as a trip to the shops.

Francis’ character is clichéd; the boyfriend who, whilst caring, is totally oblivious to what’s right under his nose and becomes more dismissive as time goes on. After reviewing CCTV footage of the stalker, Julia says “He’s staring right at me.” To which he replies, “Or he’s staring at the woman who’s staring at him”. Glusman is the weak link here, his performance feeling distant, bordering on phoned-in at times.

Watcher is ultimately about the fear of isolation, loneliness and not fitting in, which is shiningly conveyed by Monroe and her director. The steady pacing and dark tone won’t be to everyone’s liking, but the payoff, whilst somewhat generic, does bring things to a satisfyingly bloody conclusion.

An honourable mention must also be given to the brit actor Burn Gorman, who delivers a quietly unsettling turn and whose character billing lends the film its title.