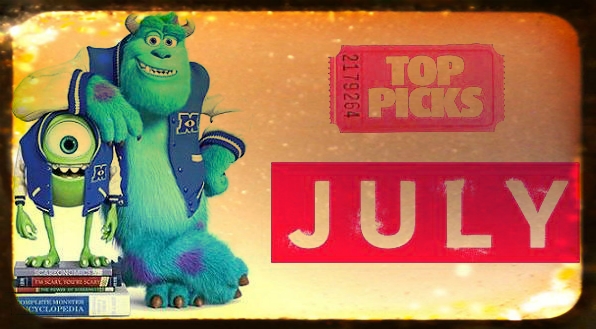 With Dynamo raising eyebrows since his apparition on the magic circuit us Brits are yearning for a healthy dose of abracadabra packed into an action-thriller-heist movie. Now You See Me certainly looks to pack all that into its running time. Under the adept direction of Louis Leterrier (The Transporter, Unleashed), the film follows a quartet of magicians know as The Four Horsemen (Jesse Eisenberg, Isla Fisher, Woody Harrelson, and Dave Franco) who use their mastery of magic to perform their greatest performance to date, transferring a millionaires bank funds into the accounts of members of the audience.

Oscar-winning filmmaker Sofia Coppola is back directing, writing and producing somewhat of a genre change for her – the caper film, The Bling Ring, based on the Vanity Fair story “The Suspect Wore Louboutins” by Nancy Jo Sales. Emma Watson has suddenly come of age and, as the trailer shows, we can expect to see her with different eyes as she plunders celebrity homes with her gang of crooks who come to be known as “The Hollywood Hills Burglars,” “The Burglar Bunch,” and “The Bling Ring,” all in the name of finding fame.

Despite the film being headed up by an ensemble cast of virtual unknowns, with the exception of the aforementioned Watson, The Bling Ring is sure to be one of our guilty summer season vices.

A Field In England – 5 July

Since his 2009 debut, Down Terrace, Ben Wheatley has quickly clambered up the ladder of indie British filmmakers concocting a new wave pedigree of horror. If you thought Kill List and Sightseers reinvented the mould, the trailer for A Field in England promises an heftier doses of ingenuity as Wheatley forays into the English Civil War.

Many may be put off by the black-and-white decision but it certainly seems to be making a comeback as of late with Wheatley explained he took this route as the film in colour would have been “really distracting.”

Expect nothing to be done by the book and a film destined to achieve late-night cult screening status for years to come.

After thirteen films Pixar are picking up their backpacks and heading back to school with their first ever prequel, Monsters University. The film follows the antics of  Mike Wazowski (voiced by Billy Crystal) and James “Sulley” Sullivan (voice by John Goodman) relating their extremely shaky first encounter as monster fraternities battle it out in the annual Scare Games. Audiences can look forward to more than a few hat tips to cult ‘80s college movies so the film is sure to cater for kids and kidults alike.

Since the first footage of Guillermo’s Del Toro‘s Pacific Rim debuted at Comic-Con last year everyone has been waiting with bated breath see giant robots fight it out on the big screen against giant monsters (Kaiju). It certainly sounds like the perfect recipe for a generic summer blockbuster “a la Transformers”, but the promotional goodies haven’t turned sour yet and probably won’t as the release of the film is upon us. Not only that but with plotlines such as the robots being physically linked to the pilots, meaning they share memories, the simple premise becomes much more than brain switch off eye-candy.

To cut a story short the film relates how the Kaiju rise out of a dimensional portal in the ocean with the humans building massive robots, known as Jaegers, which require two pilots to fight in perfect synchronisation. If you want eye-candy that comes bundled with a plot that actually provides fodder to chew on this summer then Del Toro serves it up on a platter here.

Drake Doremus follows up Douchebag and Like Crazy with Breathe In, a drama which the director had in fact completed photography on before Like Crazy had even hit cinemas. Collaborating once again with the actress Felicity Jones the film also boasts the presence of the acting muscles that are Guy Pearce and Amy Ryan. Whilst Doremus has confirmed the implementation of his semi-improvised filming process used for previous projects, Breathe in is said to implement a more conventional, handheld-free aesthetic, which we can’t wait to experience.

Following the first two “Cornetto Trilogy” outings that were Shaun of the Dead and Hot Fuzz the word excited doesn’t even begin to describe how much expectation there is for the final entry, The World’s End. The film follows a group of old friends who decide the time has come to relive an epic pub-crawl from their youth which they do, only something apocalyptic gets in the way.

Alongside Pacific Rim, this is the other biggest blockbuster coming out in the month of July. It’s also the film fans of the comics have been waiting for as this is the first time the series rummages into the character’s comic book roots in Japan.

The Wolverine finds Hugh Jackman back for a fifth time as Logan, this time doing battle with ninjas and the yakuza.

When Aronofsky pulled out of the project expectations faded but, given the film’s eventual director, James Mangold’s track record including the likes of, Walk The Line, Identity and 3:10 to Yuma the project has been nurtured in safe hands.