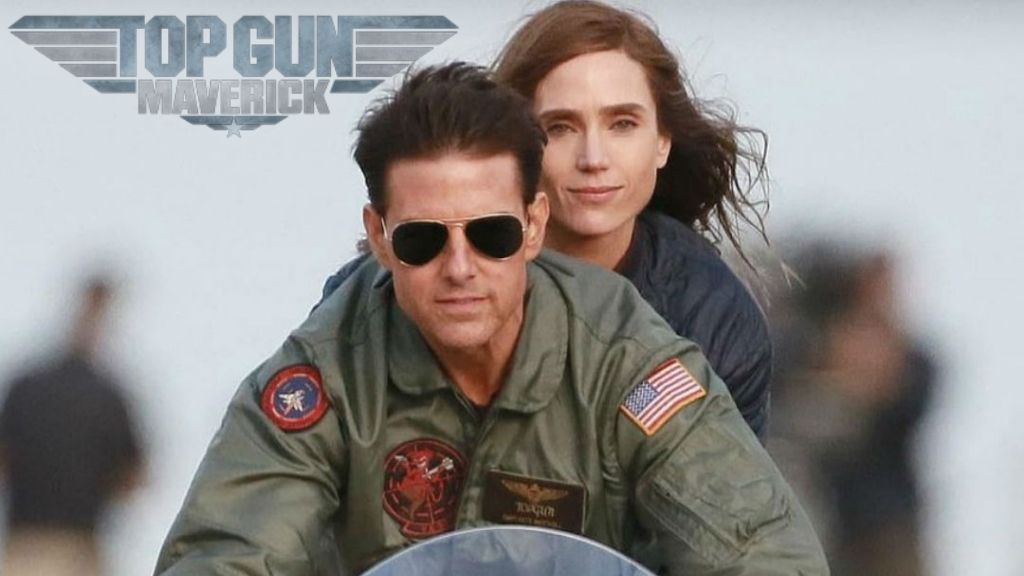 Directed by Joseph Kosinski (Oblivion), from a screenplay written by Christopher McQuarrie, Eric Warren, and Ehren Kruger, Top Gun: Maverick falls back into formation with one of the Navy’s top aviators, Pete “Maverick” Mitchell (Tom Cruise) who we find pushing the envelope as a courageous test pilot and dodging the advancement in rank that would ground him. When he finds himself training a detachment of Top Gun graduates for a specialized mission the likes of which no living pilot has ever seen, Maverick encounters Lt. Bradley Bradshaw (Miles Teller), call sign: “Rooster,” the son of Maverick’s late friend and Radar Intercept Officer Lt. Nick Bradshaw, aka “Goose”.

Facing an uncertain future and confronting the ghosts of his past, Maverick is drawn into a confrontation with his own deepest fears, culminating in a mission that demands the ultimate sacrifice from those who will be chosen to fly it. Top Gun: Maverick also stars Jennifer Connelly, Jon Hamm, Glen Powell, Lewis Pullman, Charles Parnell, Bashir Salahuddin, Monica Barbaro, Jay Ellis, Danny Ramirez, Greg Tarzan Davis with Ed Harris.

The Royal Film Performance™ is the flagship fundraiser for long-time Paramount non-profit partner, The Film and TV Charity, an organization that supports the tens of thousands of people working behind the scenes in the UK’s world-leading film and television industry.

Commenting on the event, TOP GUN: MAVERICK producer, Jerry Bruckheimer said, “I am delighted that the UK premiere of TOP GUN: MAVERICK will take place in aid of The Film & TV Charity. After 36 years, we are thrilled to bring Captain Pete ‘Maverick’ Mitchell back to the big screen with the help of an incredible cast and truly talented crew. We know audiences around the world are going to love returning to the skies in this long-awaited return, and we are thrilled to be able to support such an amazing charity that continues to aid and support the UK film industry.”

John Fletcher, Managing Director of Paramount Pictures UK, said: “We are hugely excited and honoured that TOP GUN: MAVERICK will be the 72nd Royal Film Performance 2022.  We feel this worthy charity is a fantastic partner for this hugely anticipated movie and on behalf of Paramount we look forward to welcoming everyone to what we hope will be a most memorable night.”

“The Royal Film Performance gives us the opportunity to lend focus to the brilliant, creative individuals who make up the film, TV, and cinema community – and the UK premiere of Top Gun: Maverick makes that opportunity just about as big as it can be,” added Alex Pumfrey, CEO of The Film and TV Charity, “For that, our heartfelt thanks must go to Paramount Pictures, Skydance Media, and TC Productions.

The last couple of years have been incredibly tough for everyone, not least people working behind the scenes who saw their livelihoods threatened by the pandemic. After such a challenging time, it really does feel special to be using the platform that is The Royal Film Performance to celebrate the return of event cinema and also to shine a light on the support we’re able to offer to those who make it all possible. Thanks to the generosity of our guests, and the thousands of people and organizations who have donated to the charity, we have been able to support more than 10,000 people in the last two years – and our work is only just beginning.

We continue to develop new sources of support, always tailored to the needs of our colleagues and friends across the industry, providing ways of helping with mental health and wellbeing, financial aid and guidance, or with practical solutions to issues they may encounter. Occasions like The Royal Film Performance mean we can continue to do so, and for this, we are endlessly grateful to everyone who makes the event possible.”

Tickets for the Royal Film Performance™ and UK Premiere Screening will go on sale from 19th April and will be available here. Paramount Pictures will release TOP GUN: MAVERICK a few days later in the UK and Ireland on 25 May 2022.