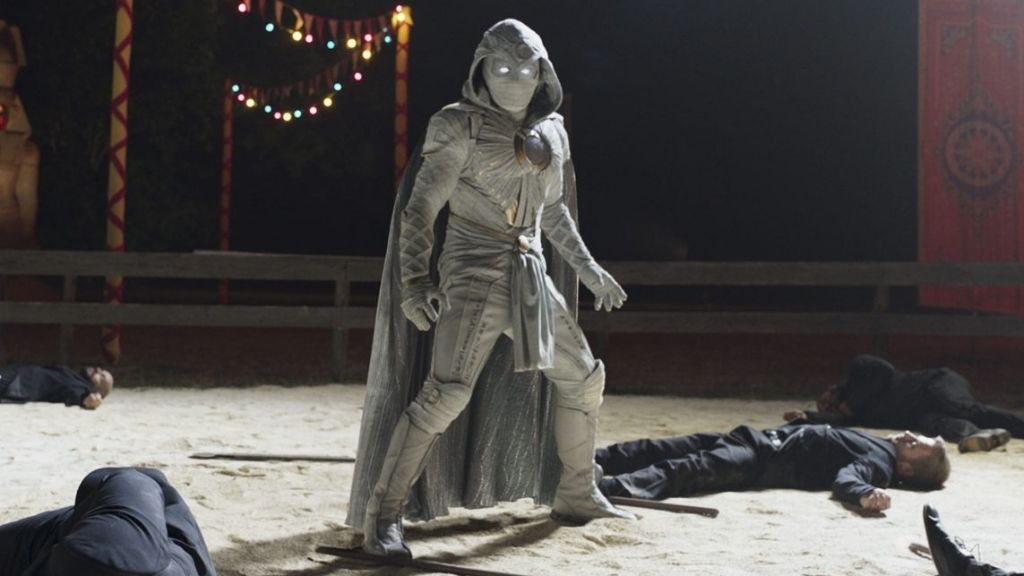 Yesterday’s Super Bowl saw Marvel debut the latest trailer for its upcoming Disney+ series, “Moon Knight“, based on writer Doug Moench and artist Don Perlin’s character of the same name who first appeared in “Werewolf by Night #32” in August 1975.

Starring Oscar Isaac (Dune, The Card Counter), Ethan Hawke (Black Phone, Sinister) and May Calamawy (Together Together), created by Jeremy Slater (Pet, “The Exorcist”), and with episodes directed by Mohamed Diab (Amira, Clash) and the filmmaking duo Justin Benson and Aaron Moorhead (Spring, Something in the Dirt), “Moon Knight” follows Steven Grant (Isaac), a peaceful gift store employee, who starts to experience blackouts and memories of a different life. Steven learns that he is suffering from dissociative identity disorder and that he shares a body with mercenary Marc Spector. When Steven/Marc’s enemies descend upon them, they must navigate their complex identities as they become embroiled in a deadly mystery among the powerful gods of Egypt.

Commenting on the new series to Empire, Marvel Studios president Kevin Feige said that the series brings a harder edge to the MCU:

“He’s brutal. It’s been fun to work with Disney+ and see the boundaries shifting on what we’re able to do. There are moments [in the series] when “Moon Knight” is wailing on another character, and it is loud and brutal, and the knee-jerk reaction is, ‘We’re gonna pull back on this, right?’ No. We’re not pulling back. There’s a tonal shift. This is a different thing. This is Moon Knight.”

Moon Knight streams on Disney+ from March 30 and, in the meantime, we’ll leave you with the aforementioned Super Bowl LVI Spot.