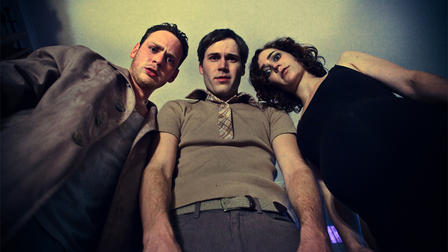 Generally, the term black comedy is bounced around so much that a lot of filmmakers miss the mark. Often they become offensive, bland or the lack of balance teeters the film out of balance. When you add an Academy Award winner writer (in the form of Shawn Christensen who penned Curfew,) then surely you’re black comedy enthused short would live up to lofty heights. Wellllll, Grandmother’s Not A Toaster is a pretty decent flick but it never fully grasps it’s realised potential. And it’s damn disappointing.

Grandmother’s Not A Toaster tells the tale of two selfish grandchildren and one kinda nice one who are plotting to steal their elderly relatives inheritance. However, their own greed and malice come undone when their ploys start unravelling in front of them. Can this really be the legacy that Grandmother is leaving behind?

The effects of GNAT are impressive. The aspects of the film are told through the characters POV that switch and change the perspective of the film. Instead of telling cohesive yet different tales, it pretty much allows the audience to experience the visceral arcs of the grandchildren and the grandmother. Though the perspective is not entirely realised and it falls a bit flat which is a shame because the humour and vibes that come through from the beginning work best. The characters are strong but they get lost in the every changing POV’s and the end that doesn’t quiet slot in to the rest. Still, there are plenty of laughs to make it a genuinely good short.

But you’ll be left wishing there were more.