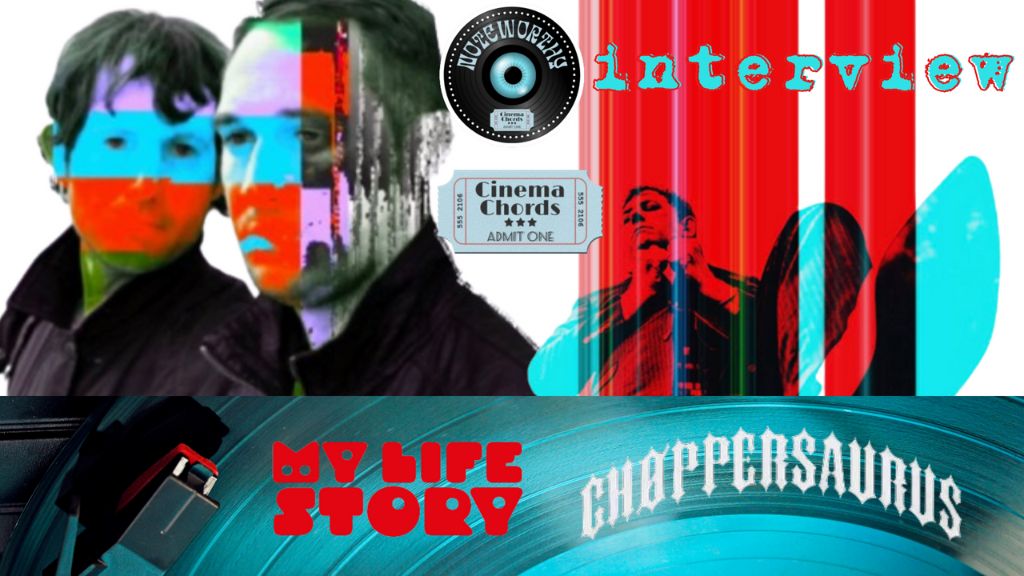 The working week (and Emerald Green) strikes again so, in the hope of helping you shake off the Monday blues, we’re back with another episode of Noteworthy, our weekly series of candid vodcasts. For Episode #16 it’s our pleasure to celebrate all things My Life Story and Choppersaurus with Jake Shillingford and Nick Evans.

For those a bit younger than this writer who aren’t familiar with today’s guests, My Life Story is an English pop/chamber orchestra group that started life in London in 1993. Releasing their first single, “Girl A, Girl B, Boy C”, that same year, the band went on to amass a loyal fan following on the strength of a succession of truly unique and infectious orchestral singles, unforgettable live performances and their debut album, 1996’s “Mornington Crescent.” However, it was only with the release of their second album, “The Golden Mile,” in 1997 that saw the band really hit its stride, fuelled by a prolific run of chart-reaching singles that fit snugly in with the Britpop zeitgeist.

Fronted by singer/songwriter Jake Shillingford, the group consisted of a regular line-up of twelve members with their numbers seldom dropping down to single figures until 1999, when their third album was credited to only four regular members, although most of the original line-up still performed as session musicians. Sadly that was the last album the band released as a whole with the members calling it quits following a series of valedictory gigs in December 2000.

But Shillingford kept the spirit of My Life Story going in his next project, ExileInside, collaborating with former band members Aaron Cahill and Mal Campbell to record more of an eighties electronica-inspired sound.

Shillingford later brought My Life Story back into the public eye in 2009 when he recorded a solo acoustic album called “Written Large,” comprising mainly stripped-down acoustic versions of songs from My Life Story and ExileInside, plus an additional two new self-penned tracks.

Five years later, in 2013, Shillingford founded the music production company Choppersaurus with songwriting partner and multi-instrumentalist Nick Evans (who has DJ’d at some of the world’s most prestigious clubs, including Pacha, Ministry of Sound and Eden). This initiative saw the duo record a new album which ultimately served as a segue into the world of scoring music for film, television and trailers. The tracks “Motel 66” and “Did You Come Alone?” from their album “Hex” were featured on the first series of “The Grand Tour” and since then the duo has gone on to contribute music for various US and UK TV series, films and trailer, including “Homeland”, the US horror film “Blood Fest”, “American Horror Story: 1974” and, most recently, the BBC’s flirty drama, “Conversations With Friends”.

Despite working for film and television, 2019 would see the long-awaited return of My Life Story in the form of a fourth studio album, World Citizen, the first studio LP release since 2000’s “Joined Up Talking”. On top of that, barely a year later, Shillingford and Evans secured a worldwide deal with Mute Song that included the rights to both “World Citizen” and much of My Life Story’s back catalogue that Universal Music Publishing had previously owned.

Today, to celebrate a decade since the creation of Choppersaurus, CinemaChords’ Howard Gorman sat down with Shillingford and Evans to talk about the genesis behind establishing their production company that led them to write music for TV and film, how My Life Story also came back into the fold more recently, and what the duo has been up to since the release of “World Citizen,” both in terms of Choppersaurus and My Life Story endeavours.