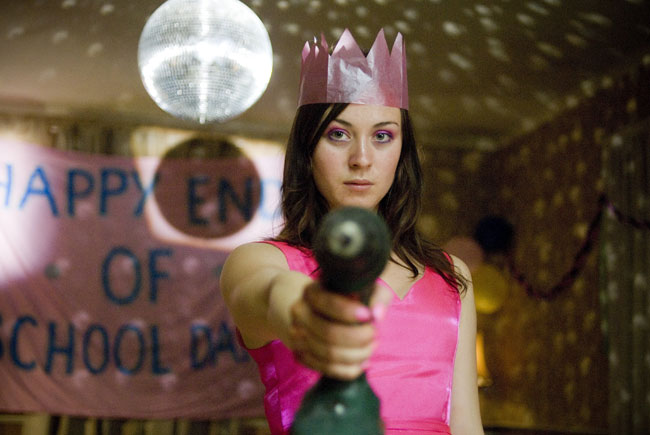 I seem to be setting a trend with reviewing horror films that feature proms. Is this some childhood trauma subconsciously emerging? Prom anyone? Anyway back to The Loved Ones…

Brent is a depressed dope smoking teen, who after the death of his father is trying to smoke away his troubles. Brent’s year is about to get a whole lot worse when he rejects the offer of a prom date from Lola. Unfortunately for Brent no one ever says no to Lola and gets away with it. Lola’s dad will not let her precious night be ruined and makes sure she has the perfect makeshift prom at home, and with a chair bound Brent, the party really begins. A mirrored glitter ball dances above their heads, as a pink satined Lola and her parents invite Brent to have dinner with them. Lola and her father proceed to take revenge on Brent by systematic torturing him. Be prepared for some real gut wretching scenes.

The film begins at a high school and follows the trials and tribulations of our teenage characters, from peer pressure, sexuality and drug abuse. The gritty style of filming, level of violence and the psychotic characters transport this film into a depth of gore and horror which is completely unexpected. The violence, although in abundance, is never pushed to the side of absurdity, the tension that all three characters create on screen allows for each scene to be a nail biting experience. Many critics have regarded this film as ‘Torture Porn’, but the dark humour and relationships created drives the film and does not offer violence for violence sake. Also the sub plot of boy and goth girl, who actually make it to the prom, well for ten minutes at least, gives the audience sporadic relief from the horrors happening at the ‘princess’ household. The Loved Ones is a personal favourite of mine and only adds to the awesome horror films produced by Australia including Snowtown, Wolf Creek, Primal, and Picnic at Hanging Rock.

Life Lessons: Never get between a girl and her dad, and when the kettle boils run.

“Am I pretty enough?” – Only when you’re wielding that electric drill.

In this article:The Loved Ones