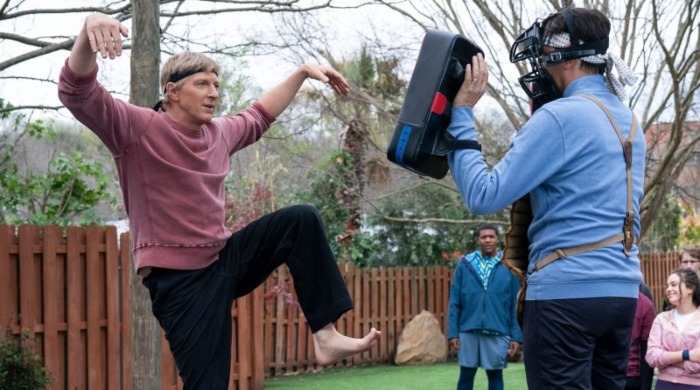 Every legacy. Every rivalry. Leads to this.

Netflix has just released the eagerly-anticipated trailer for the fourth season of Cobra Kai just weeks away from its premiere date this New Year’s Eve. Get ready to start 2022 with a bang as the trailer promises something fans of the films and series have never seen before: Daniel LaRusso and Johnny Lawrence putting their past behind them to join forces. And this that wasn’t enough already, John Kreese’s long-lost friend, Terry Silver (the key villain in The Karate Kid Part III) wants back in on the action all of 32 years since he first appeared in this original saga.

Season 4 finds the Miyagi-Do and Eagle Fang dojos joining forces to take down Cobra Kai at the All Valley Under 18 Karate Tournament… and whoever loses must hang up their gi. As Samantha and Miguel try to maintain the dojo alliance and Robby goes all in at Cobra Kai, the fate of the Valley has never been more precarious. What tricks does Kreese have up his sleeve? Can Daniel and Johnny bury their decades-long hatchet to defeat Kreese? Or will Cobra Kai become the face of karate in the valley?

Cobra Kai Season 4 premieres globally this coming December 31, only on Netflix and, in the meantime, we’ll leave you with the latest trailer that is sure to leave you waiting impatiently to return to All Valley to ring the year out with a bang.