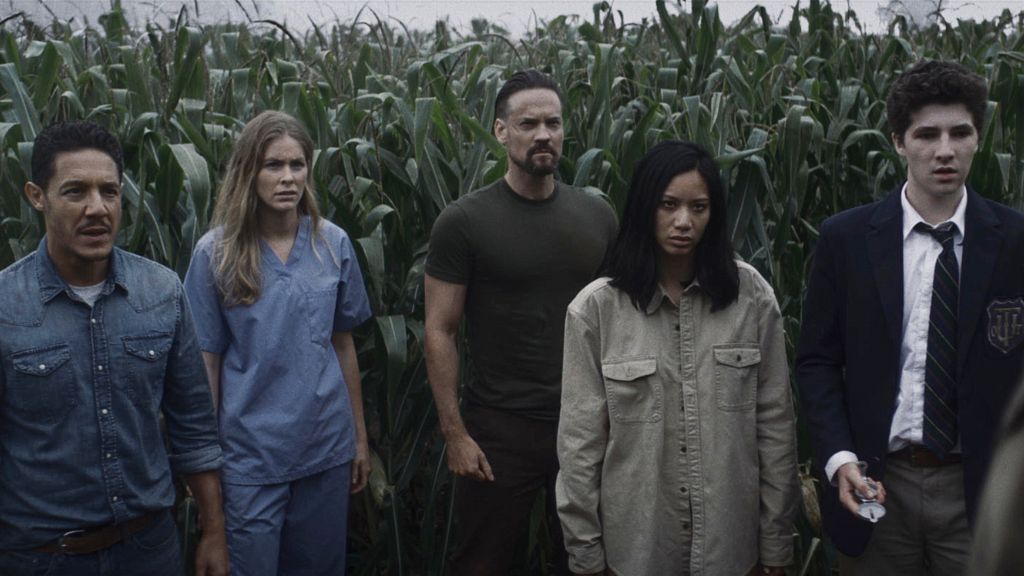 Synopsis: Six strangers suddenly awaken in a remote, endless cornfield. Stripped of their possessions, they are left with only six items: a gun with a single bullet, matches, a lantern, a knife, a compass, and a flask of water. As mysterious sirens blare in the distance and traps appear at every turn, the group realizes it’s been plunged into a cat-and-mouse game with an unseen evil, and survival depends upon solving a diabolical – and deadly – puzzle.

Escape the Field, a briskly paced horror-thriller from first-time feature director Emerson Moore is a clever combination of themes you’ll be familiar with if you’ve seen the likes of In the Tall Grass and Escape Room. Moore’s characters may be as thinly drawn as a stick man, but this is far from being detrimental to the enjoyment of the film, as they are a bunch of beautifully flawed people allowing Moore to deliver an entertaining B-movie that breezes through its 88-minute runtime. There is no preamble to spell out exactly how each person ends up in the mysterious field. Instead, we are thrown straight into proceedings.

Sam (Jordan Claire Robbins) is the first of the diverse band of victims to wake up, still in her work scrubs with a revolver in her hand. From here she meets dad Tyler (Theo Rossi), muscular army vet Ryan (Shane West – Timothy Olyphant’s brother from another mother), Pentagon employee Denise (Elena Juatco), a schoolboy named Ethan, and a rather vexing British woman named Cameron (Tahirah Sharif). They too have been given an object, but what are they supposed to do with them? Who can they trust? And just where the hell they are?

What unfolds is a story with enigmas at every turn with Robbins’ nurse playing the pivotal role in figuring everything out, under the assumption that each puzzle solved is one step closer to freedom.

Whilst the group is occupied with finding a way out, they are being, ahem, stalked through the rows of corn by something with blood-red eyes. It’s fast; it’s deadly; and an unfortunately underused part of the plot. This vicious predatory antagonist provides the director with a real opportunity to build tension and create some genuine scares, but Moore fails to capitalize on this premise, and one can’t help but wonder just how crazy (and bloody) things could have gotten had he let the monster truly loose.

Admittedly, the film begs more questions than it answers, but it functions perfectly well as a slice of escapist entertainment, and a nod that there could be more to come is certainly welcome for this writer.

Escape the Field is in Select Theaters, On Digital and On Demand now.