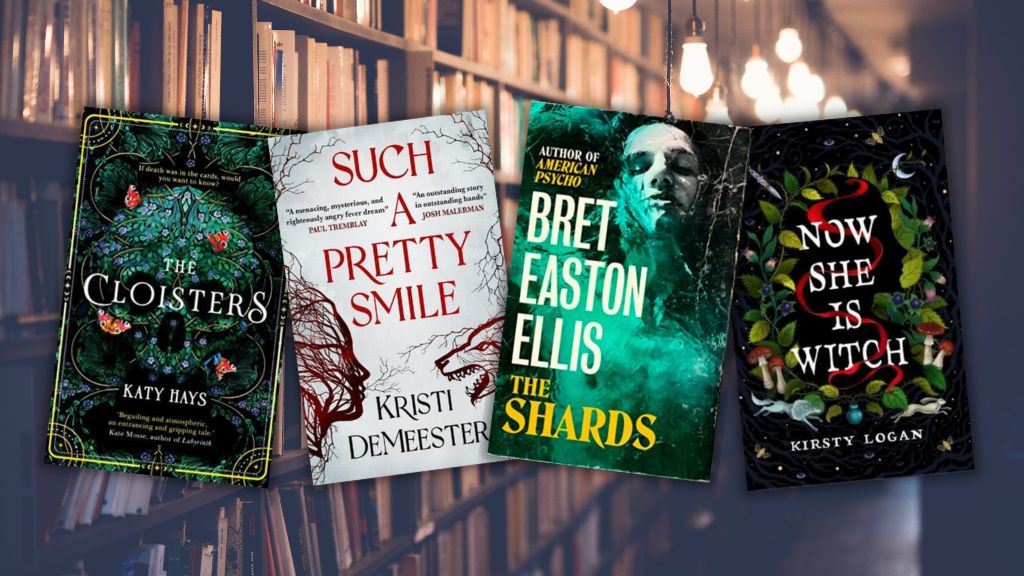 Happy New Year to you all and we are thrilled to kick off 2023 with a brand new section, “Clout of Print”, covering all the latest book releases. On the literary front, the year has started strong, with a whole host of intriguing new titles that are sure to snap you out of a reading rut or make great company amidst the other books in your constantly expanding TBR.

So, without further ado, read on to find out which books releasing in the month of January are sure to help you achieve your 2023 reading resolutions. And don’t forget to let us know which of these, or any others, you’re especially looking forward to in the comments below.

Such a Pretty Smile marks the biting debut from an electrifying new voice which servers up a meditation on powerful women, angry men and the countless struggles women have to contend with to overcome the forces that seek to mute their say in the world.

There’s something out there that’s killing. Known only as The Cur, he leaves no traces, save for the torn bodies of girls, on the verge of becoming women, who are known as trouble-makers; those who refuse to conform, to know their place. Girls who don’t know when to shut up.

2019: Thirteen-year-old Lila Sawyer has secrets she can’t share with anyone. Not the school psychologist she’s seeing. Not her father, who has a new wife, and a new baby. And not her mother—the infamous Caroline Sawyer, a unique artist whose eerie sculptures, made from bent twigs and crimped leaves, have made her a local celebrity. But soon Lila feels haunted from within, terrorized by a delicious evil that shows her how to find her voice—until she is punished for using it.

2004: Caroline Sawyer hears dogs everywhere. Snarling, barking, teeth snapping that no one else seems to notice. At first, she blames the phantom sounds on her insomnia and her acute stress in caring for her ailing father. But then the delusions begin to take shape—both in her waking hours, and in the violent, visceral sculptures she creates while in a trance-like state. Her fiancé is convinced she needs help. Her new psychiatrist waves her “problem” away with pills. But Caroline’s past is a dark cellar, filled with repressed memories and a lurking horror that the men around her can’t understand.

As past demons become a present threat, both Caroline and Lila must chase the source of this unrelenting, oppressive power to its malignant core. Brilliantly paced, unsettling to the bone, and unapologetically fierce, Such a Pretty Smile is a powerful allegory for what it can mean to be a woman, and an untamed rallying cry for anyone ever told to sit down, shut up, and smile pretty.

New York Times bestselling author Leigh Bardugo returns with an intricate tale of magic, violence, and all too real monsters in Hell Bent, a book brimming with history and the author’s signature twists.

Find a gateway to the underworld. Steal a soul out of hell. A simple plan, except people who make this particular journey rarely come back. But Galaxy “Alex” Stern is determined to break Darlington out of purgatory – even if it costs her a future at Lethe and at Yale.

Forbidden from attempting a rescue, Alex and Dawes can’t call on the Ninth House for help, so they assemble a team of dubious allies to save the gentleman of Lethe. Together, they will have to navigate a maze of arcane texts and bizarre artifacts to uncover the societies’ most closely guarded secrets, and break every rule doing it. But when faculty members begin to die off, Alex knows these aren’t just accidents. Something deadly is at work in New Haven, and if she is going to survive, she’ll have to reckon with the monsters of her past and a darkness built into the university’s very walls.

Nik has lots of questions about his late father but knows better than to ask his mother, Avani. It’s their unspoken rule.

When his grandfather dies, Nik has the opportunity to learn about the man he never met. Armed with a key and new knowledge about his parents’ past, Nik sets out to unlock the secrets that his mother has been holding onto his whole life.

As the carefully crafted portrait Avani has painted for her son begins to crack, and painful truths emerge, can the two of them find their way back to each other?

The Things That We Lost is a beautifully tender exploration of family, loss and the lengths to which we go to protect the ones we love.

From the snowy winter woods to the bright midnight sun; from lost and powerless to finding your path, Now She is Witch conjures a world of violence and beauty – a world where women grasp at power through witchcraft, sexuality and performance, and most of all through throwing each other to the wolves.

Lux has lost everything when Else finds her, alone in the woods. Her family, her lover, her home – all burned. The world is suspicious of women like her. But Lux is cunning; she knows how to exploit people’s expectations, how to blend into the background. And she knows a lot about poisons.

Else has not found Lux by accident. She needs her help to seek revenge against the man who wronged her, and together they pursue him north. But on their hunt they will uncover dark secrets that entangle them with dangerous adversaries.

Bret Easton Ellis’s masterful new novel is a story about the end of innocence, and the perilous passage from adolescence into adulthood, set in a vibrantly fictionalized Los Angeles in 1981 as a serial killer begins targeting teenagers throughout the city.

17-year-old Bret is a senior at the exclusive Buckley prep school when a new student arrives with a mysterious past. Robert Mallory is bright, handsome, charismatic, and shielding a secret from Bret and his friends even as he becomes a part of their tightly knit circle. Bret’s obsession with Mallory is equaled only by his increasingly unsettling pre-occupation with The Trawler, a serial killer on the loose who seems to be drawing ever closer to Bret and his friends, taunting them–and Bret in particular–with grotesque threats and horrific, sharply local acts of violence. The coincidences are uncanny, but they are also filtered through the imagination of a teenager whose gifts for constructing narrative from the filaments of his own life are about to make him one of the most explosive literary sensations of his generation. Can he trust his friends–or his own mind–to make sense of the danger they appear to be in? Thwarted by the world and by his own innate desires, buffeted by unhealthy fixations, he spirals into paranoia and isolation as the relationship between The Trawler and Robert Mallory hurtles inexorably toward a collision.

Set against the intensely vivid and nostalgic backdrop of pre-Less Than Zero LA, The Shards is a mesmerizing fusing of fact and fiction, the real and the imagined, that brilliantly explores the emotional fabric of Bret’s life at 17-sex and jealousy, obsession and murderous rage. Gripping, sly, suspenseful, deeply haunting and often darkly funny, The Shards is Ellis at his inimitable best.

From the New York Times bestselling author of The Final Girl Support Group comes a hilarious and terrifying new novel.

When their parents die at the tail end of the coronavirus pandemic, Louise and Mark Joyner are devastated but nothing can prepare them for how bad things are about to get. The two siblings are almost totally estranged, and couldn’t be more different. Now, however, they don’t have a choice but to get along. The virus has passed, and both of them are facing bank accounts ravaged by the economic meltdown. Their one asset? Their childhood home. They need to get it on the market as soon as possible because they need the money. Yet before her parents died they taped newspaper over the mirrors and nailed shut the attic door.

Sometimes we feel like puppets, controlled by our upbringing and our genes. Sometimes we feel like our parents treat us like toys, or playthings, or even dolls. The past can ground us, teach us, and keep us safe. It can also trap us, and bind us, and suffocate the life out of us. As disturbing events stack up in the house, Louise and Mark have to learn that sometimes the only way to break away from the past, sometimes the only way to sell a haunted house, is to burn it all down.

Hay’s haunting and magical genre-blender has all the ingredients of a sui generis debut that we’re sure will keep you on tenterhooks till the very end.

When Ann Stilwell arrives in New York City, she expects to spend her summer working as a curatorial associate at the Metropolitan Museum of Art. Instead, she finds herself assigned to The Cloisters, a gothic museum and garden renowned for its medieval art collection and its group of enigmatic researchers studying the history of divination.

Desperate to escape her painful past, Ann is happy to indulge the researchers’ more outlandish theories about the history of fortune telling. But what begins as academic curiosity quickly turns into obsession when Ann discovers a hidden 15th-century deck of tarot cards that might hold the key to predicting the future. When the dangerous game of power, seduction, and ambition at The Cloisters turns deadly, Ann becomes locked in a race for answers as the line between the arcane and the modern blurs.

From the mastermind behind bestselling author Child 44 comes a fast-paced, suspenseful thriller which follows an Antarctic colony of global apocalypse survivors who set out to rebuild civilisation under the harshest circumstances imaginable.

The world has fallen. Without warning, a mysterious and omnipotent force has claimed the planet for their own. There are no negotiations, no demands, no reasons given for their actions. All they have is a message: humanity has thirty days to reach the one place on Earth where they will be allowed to exist…Antarctica.

Cold People follows the perilous journeys of a handful of those who endure the frantic exodus to the most extreme environment on the planet. But their goal is not merely to survive the present. Because as they cling to life on the ice, the remnants of their past swept away, they must also confront the urgent challenge: can they change and evolve rapidly enough to ensure humanity’s future? Can they build a new society in the sub-zero cold?

Original and imaginative, as profoundly intimate as it is grand in scope, Cold People is a masterful and unforgettable epic.

Author of critically acclaimed best-selling novels ‘Charcoal’, ‘Derelict’ and ‘Ghosted’ – and poetry collections ‘Desire Lines’, ‘How the Heart Behaves’, ‘Relationshipwrecks’ and haiku collection ‘Five Seven Five’, Rowney’s latest release is dubbed a “riveting one-sitting nail-biter” so of course we had to include it.

When Ella hears of her father’s death, the last thing she wants is to return to the childhood home where he subjected her to years of trauma. But motivated by revenge, she and partner Dan do just that.

At first, the memories of her past overwhelm her, but the move to Bittersweet Acres is more dangerous than Ella could ever have imagined.

Strange notes start to appear, Ella’s behaviour becomes erratic, and she’s sure that Dan is responsible for the bizarre events that threaten her mental and physical health.

He says he’s trying to protect her, but nothing is as it seems.