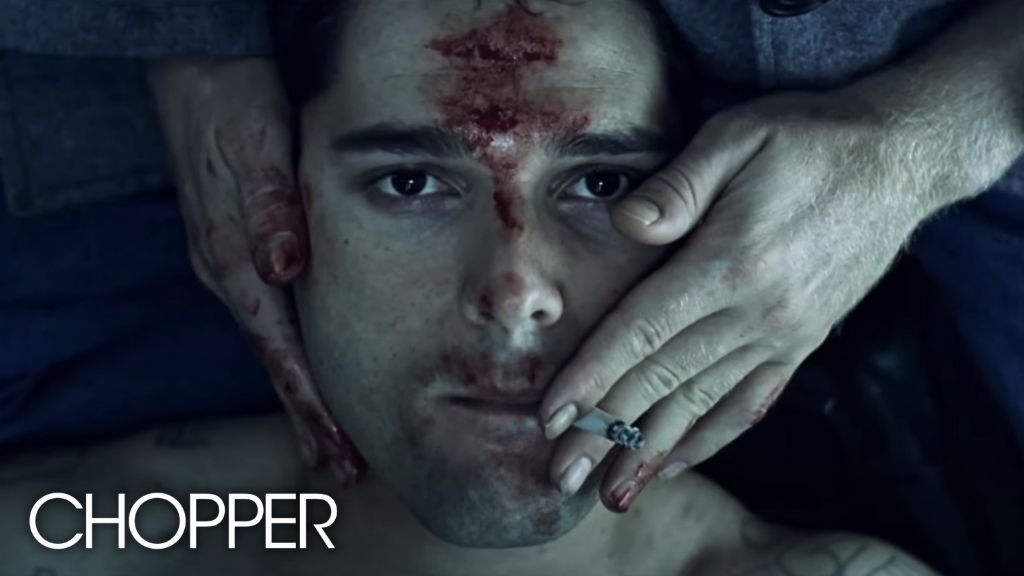 This down-and-dirty account of renowned Australian crook Mark “Chopper” Read (played by Eric Bana in what proved to be his break-out role), is based on the bestselling autobiographical books of the notorious “celebrity” gangster turned author, who would surely today be seen as fodder for a Netflix docuseries.

Chronicling Mark Read’s life, both in and out of prison, the film never skimps on the details when it comes to all the shootings, shankings, drugs, and mayhem involved. The film was met with critical acclaim on release, before going on to find an even wider audience when it became a home video favorite in the early 2000s. And Bana’s performance was so intense and impressive that Read himself praised his performance on the 20 to 1 episode Great Aussie Films, where Chopper came 17th.

With the remastered version releasing in key cinemas and on digital platforms this March 25th, CinemaChords caught up with Dominik to reminisce about his stone-cold classic that catapulted both his own and Bana’s careers onto the international stage.

CinemaChords: It must be great to see Chopper returning to cinemas, not just after 20 years, but also given how tough a time it has been for any film to release in theaters as a result of Covid?

Andrew Dominik: It’s great. The rights reverted back to us so er went around and sold it to a bunch of different territories and it’s really great that the English distributor wanted to not just re-release it but also put it on in theaters again. I mean, that’s fantastic.

Australia has a rich history of producing shocking films that have been inspired by true crimes, like Blackrock, The Boys, or Snowtown. What was it about Chopper’s story that sparked your interest to direct your debut feature about him?

Well, he was funny. Charm goes a long way, you know?  He wasn’t really all that well known but it was the books that got me. When his book came out, it was a little bit of a publishing sensation at the time? I think it has the distinction of being the most shoplifted book in Australian history. It was made up of a bunch of shaggy dog stories with Mark basically putting himself in the center of a whole lot of really famous criminal stories. And they were hilarious.

And once I started researching his life, it was clear that there was a lot more going on than the Robin Hood picture that he painted about himself. And that was what was really interesting to me.

Talking of the Robin Hood picture that he paints, deciding how to balance the narrative in terms of the story you wanted to paint for the audience can’t have been an easy one. Despite all of these horrible things we see, we can’t help but feel on his side because of the point of view we’re shown even though we know we shouldn’t be empathizing with this guy?

Absolutely. We only get to see the world from his point of view. And in some ways, there’s only really one character in the story because he’s the only person we really have some sort of access to and some sense of what he wants and why he behaves the way he does. Everybody else has their motives but they are all kind of mysterious. Mark doesn’t trust them, you know?

I read that Eric [Bana] spent a couple of days in prison with Chopper. Did you also get to spend time with him and also get his blessing to go ahead with the project?

We went down and spent a weekend on this farm in Tasmania after he got released from prison. And then I got to spend a bit of time with him over the years.

But, in terms of him allowing us to make the film, he said no at first. At the time, there were a bunch of people that wanted to make a film about him. I think that he had received a better offer before he met us, or maybe he was more interested in someone else rather than a first-time filmmaker. But, for whatever reason, that ended up falling through and Mark came back to us.

When it came to making the film, Mark would meet me for many years. At first, he was in Risdon Vale in Tasmania, which is a maximum security jail. And I think it wasn’t until his security was downgraded that he was prepared to meet me. But he had wanted a film to be made for a long time. There was this hilarious sort of newspaper story account of the trial of Jimmy Loughnan where he was talking about how he thought the Commonwealth Film Commission should come out and make a film about him. That was back when he was, like, in his twenties, you know? But I tried to think about what his relationship was like. I mean, this is the mythological Chopper read from the book and it’s trying to appeal to an audience because it takes a sort of moral stance an average person can relate to. It is told like he’s just hurting drug dealers, you know? And they are just scum of the earth anyway. But Mark was a complete hypocrite. He did use drugs and all that sort of stuff. Once you got to know him a bit better, you realized that it was all much more complex than that.

Is it true that Chopper actually suggested that Eric Bana play him in the film after seeing him in a sketch comedy series called “Full Frontal”?

He did, and I kind of thought it was a bit of a joke. But the producer took Mark seriously and got the casting director to pull him in without me even knowing about it. And then they showed me Eric’s audition tape and he was great. I went down to Melbourne and spent the day with him and by the end of the day, it was clear it was going to be Eric.

But, at first, when I told people I had Eric Bana playing Chopper, people would look at me like they were embarrassed. For me, it was like saying you were going to cast Will Ferrell or the Australian version of Martin Short or something like that. People did not think it was a good idea.

In the film, Chopper spread rumors that he was working for the police so were they ever concerned about the kind of picture your film might paint about them?

Well, it was through the police that I really got the greatest picture of Mark’s behavior. I contacted them and the two policemen that are portrayed in the movie. They were the subject of an Internal Services investigation, and one of them had the whole briefing documents in his garage, which was a stack of papers that was as tall as I am. Because Chopper accused him of corruption, they investigated everything. The Internal Services division had investigated all of Mark’s actions while he was out of jail in that period of time, and they accounted for every day he was out of jail. In that time, there are statements from every single person involved in each incident that occurred, and they’d all be contradictory. But the picture of this person started to emerge that was really strange. Like that whole thing about him shooting someone and then taking him to hospital and all that sort of stuff, you know? Just a lot of contradictory behavior. And that’s when I really got interested in who he might actually be and what were the real motives behind his behavior, and what was really going on with him.

And as far as the cops were concerned, they were less worried about being accused of corruption than much less significant things. There was one police officer that was just really upset that Chopper had said he had the table manners of a billy goat. He was upset about Chopper describing his table manners even those he’d never eaten a meal with him. So, they seemed upset about a lot of different things than you would expect.

Vertigo Releasing will be re-releasing Chopper in key cinemas and on digital platforms on 25 March, 2022.