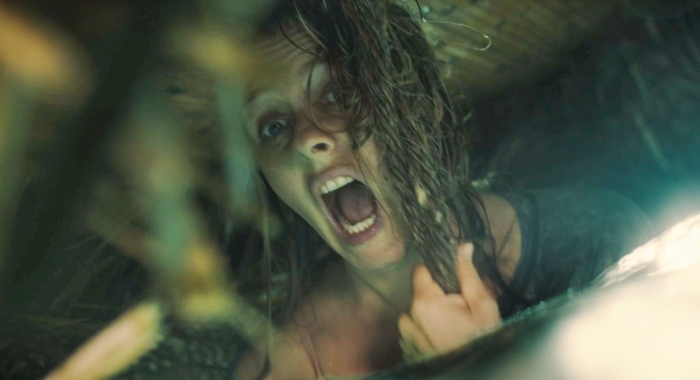 Saban Films has unleashed the first trailer for The Requin, a tense aquatic shocker that promises to ride an unrelenting wave of fear.

Written and directed by Vietnamese-born filmmaker Le-Van Kiet, and starring Alicia Silverstone, who found herself catapulted to teen idol status in the ’90s after appearing in various Aerosmith music videos and starring in the coming-of-age teen comedy Clueless, The Requin follows Jaelyn (Silverstone) and Kyle (James Tupper) when they arrive at a remote seaside villa in Vietnam for what they expect to be a romantic getaway. That isn’t to be as a torrential storm ruins their plans, reducing the villa to little more than a raft, sweeping the young couple out to sea. But that’s far from the last of their problems as another danger appears: a school of great white sharks. With her injured husband watching helplessly, Jaelyn must battle the deadly predators alone in this tense thriller that rides an unrelenting wave of fear.

Silverstone certainly seems to have taken a liking to somewhat darker material of late, having recently appeared in genre favourite The Lodge from Goodnight Mommy directors’ Severin Fiala and Veronika Franz, and the actress also stars in Drew Mylrea’s impending shocker Last Survivors.

THE REQUIN will release in theaters, On Demand and Digital on 28 January, 2022, and in the meanwhile, we’ll leave you with the trailer that is sure to reel you into its alluring premise.