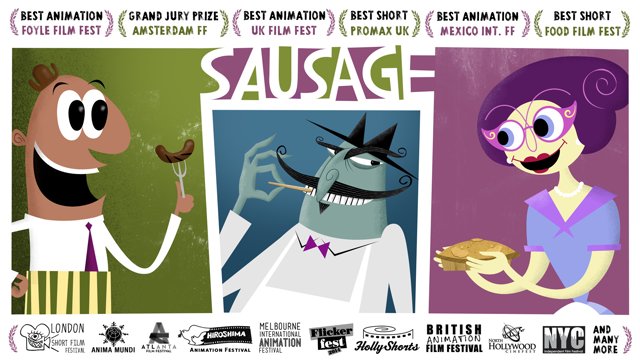 There is something so admirable about the lazy days of market holders, enticing their customers with the delicious smells of home-baked foods at affordable prizes in the squares of beautiful vintage downs. The hard working slog of open air selling where money goes straight into the pocket of the creators is dwindling to the over corporate cities and “Starbucking” mentality where companies have infiltrated every village, town and ruined their rustic aesthetic. This latest whimsical short Sausage (and yes, a French accent and inflictions are being said with that,) is a delightful little film about two stall holders whose patch is infiltrated by a gigantic metallic Supermarket chain visual metaphor creating their products, cakes and sausages, cheaper and quicker.

Director Robert Grieves has brought a quaint and impressive little short that utilises a lot of retro animated techniques. With an abundance of colour, splashed against the backdrop of a hilariously fun story – one that many people can recognise and sympathise with (though that is largely the drone like consumers whose attention is being vied for and flock to whatever offer seems best). IT was a spirit, jovial and earnest that strikes a note of companion ship for the little guys, working together to make their businesses win.

There is also an underlying theme that in the frantic rush for business and success, chain stores forget their aim and within the franticness to end up on burning up (cough, Woolworths, cough). But there is also a little sliver of possibility that there is enough room in the square for all characters if they were nice enough.

Entwined with this fantastic animation, with quirky characters that you immediately battle for throughout the film is a bustling story that is highly pleasing. Grieves’ Sausage is a brilliant film to devour, munch and feel utterly satisfied afterwards.