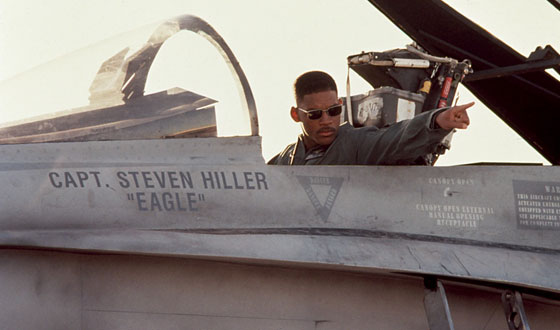 Will Smith‘s Captain Steven Hiller won’t be having another close encounter. It’s a question that’s been hanging over any of the past updates on the upcoming blockbuster – is Will Smith going to be returning? Now it seems that we have finally got our answer, and it’s one which is sure to disappoint many fans of Captain Steven Hiller in the first movie. But the exact reasons behind this decision remain a little sketchy, and it has not yet been 100% confirmed as Smith’s final decision.

It seems that Smith has opted out of returning, although an official confirmation has not yet been made. This decision is in-keeping with the actor’s statement last year about how he would be giving up blockbusters. He apparently wants to be seek out more dangerous, artistic choices in the future. As brave a decsion as that is, we are sure that there are more than a few Independence Day fans who had hoped he would change his mind.

This news does however another explanation attached to it, and that’s found in a statement made by the upcoming movie’s director. Roland Emmerich explained last year that Smith is too expensive and that his name is now too big for the film. The suggestion being that the draw that Smith holds would somewhat overwhelm the film.

The sequel, under the working title of ID Forever Part I, is currently set to be released in 2016 on (unsurprisingly) the fourth of July American holiday. It is said to be bringing back a number of the original cast alongside many new characters. So we are hoping to see Jeff Goldblum‘s Dave Levinson amongst that crowd. However he will not have Smith at his side when the next alien threat arrives.

So what do you think? Is the film going to suffer from not having Smith return? Or will it be liberated? Is the topic of the end of the world somewhat over-saturated right now? Let us know your thoughts!

In this article:film, Independence Day 2, Will Smith