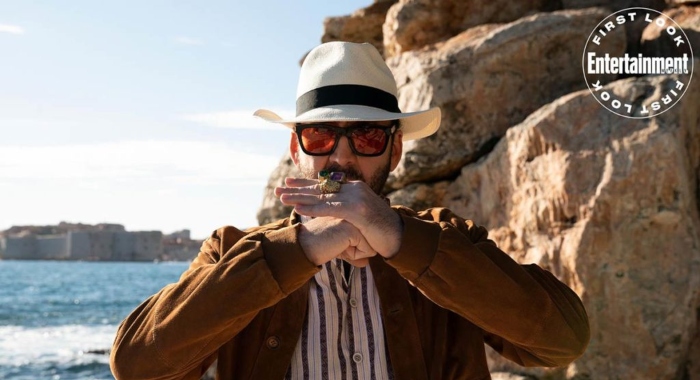 Hot on the trail of the news that Nicolas Cage will be playing the iconic role of Count Dracula, Lionsgate has today released the first images for another just as quintessential character audiences will get to see him portray later this year.

Of course, we’re talking about Nicolas Cage starring as… an alternative Nick Cage in the action-comedy “The Unbearable Weight of Massive Talent.”

When I spoke to Cage about this film last year, he explained how, “This role is going to be a complicated one, but it’s based on my early days of grafting. It would be a collision between perhaps Dave Spritz in The Weatherman as the contemporary Nic Cage, and then I’d have to go into protracted dialogue scenes with a young Nic Cage, and that would be the Nic Cage you saw on Wogan, back when I was promoting Wild at Heart with the karate kicks and the front handsprings. But it will still be stylised and meta – and therefore it’s not really me but more of a pushed version of me on both ends.”

The film is slated for a 22 April, 2022 so that’s not too much of an unbearably long time to wait now but, to tide you over in the meantime, we’ll leave you with the aforementioned images…

In this article:Lionsgate, movie, Nicolas Cage, The Unbearable Weight of Massive Talent