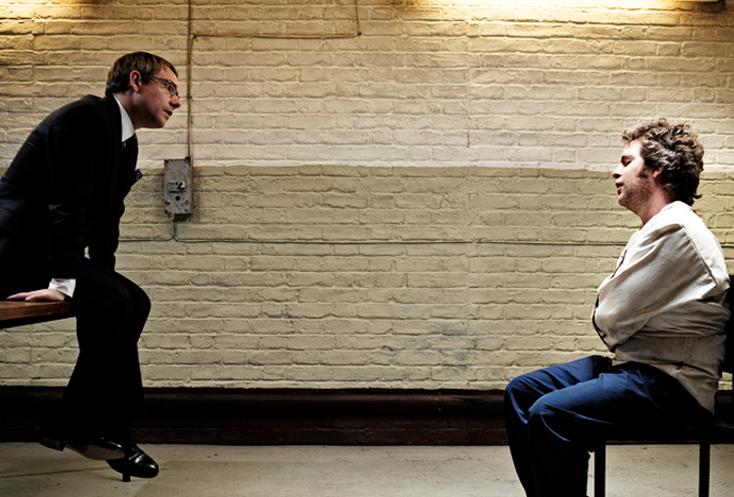 What if God were one of us? Just a stranger on a bus, trying to make his way home?

That’s the classic song from all of us but what happens if a prisoner claims to be God? And he claims to be God so much so that he even has a strong following in prison chanting his name.

That’s the problem facing psychiatrist Dr. Williams in this BAFTA nominated short “The Voorman Problem“. Tom Hollander is Voorman, an inmate at a top facility prison and when Martin Freeman’s Williams tries to deduce his sanity, Voorman sets off a strange turn of events.

While this short movie does have some comedic elements to it (the disappearance of Belgium being particularly fun), it leans more to the darker side. Director Mark Gill adds an element of the twisted and, above all, the whole thing is insanely creepy. What if someone in a penitentiary claimed to be God and it turned out they could do weird things that proved it so? A lot of this unnerving presence is placed heavily on Tom Hollander’s shoulders. He is, dare I say, insanely good at the intense playfulness of Voorman that makes him not only enjoyable to watch but almost terrifying too. Playing opposite the incredibly talented Martin Freeman makes this a charismatic film that is entertaining but also has you questioning the existence of an omnipresent God.

And yes, the underlying truth of the film is extremely disturbing
After all, what if God isn’t benevolent and is just, above all things, a trickster?

“The Voorman Problem” is available to download on iTunes