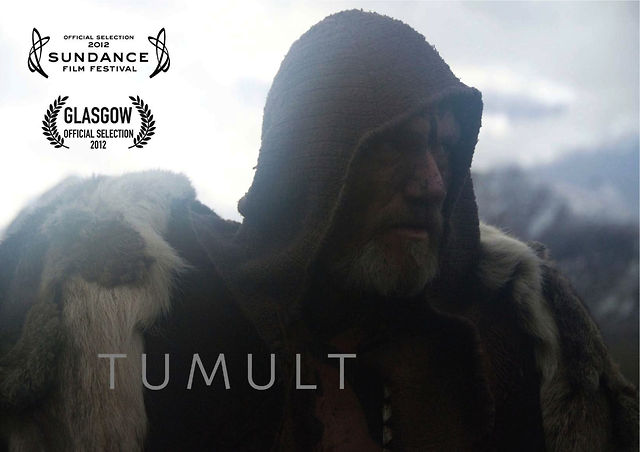 When it comes to the capabilities of a short film, it is vital that your message and plot hits quick. This week, at the Shorts on Tap Beyond Scotland, when Tumult opened I immediately rolled my eyes, yawning I was already board of what seemed to me a Game of Thrones rip-off. And then the punchline rolls in (literally) and I was awash with hysterics so loud you could hear them ricochet off the walls of 93 Feet East. I am going to try my best to describe it in a way that will entice you and make you watch it but without ruining the punchline.

At the very least the first description stands. There are four blood soaked Vikings making their way across the Scottish highlands after a massive battle has left them wounded. Leaving one of their members behind (and armless) a dying father says his last words to his feuding sons before accepting his fate with death. However, he soon learns that his wars are not over as another army come to test their strength and endurance.

It doesn’t exactly sound like a riotous movie but stick with it and you’ll have a feast of alternative comedy as black as it can get. Director Johnny Barrington has steeped the film in beautiful cinematography that really takes you to the time period and escapes of four lowly Vikings and their quest for almost salvation. This narrative, though tiresome for some, is done really well . So well that when it continuous, it strays into a different path that is wholly fresh and unique. This is where I leave you because to continue means ruining the destination. But if you see Tumult crop on any short film festival, I implore you to watch it.