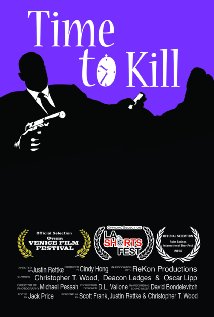 Being a hit-man is tricky business. I mean, first you’ve got to track down the mark in a largely populated city. Then you’ve got to do so without raising any suspicion, following someone around where there is lots of people who will become a bit alarmed to find a trench-coat and a concealed weapon. Don’t forget the clean-up after the murder and making sure people don’t actually see your face putting lead into a hit. Yes, being a hit-man is tricky business.

There is one possible solution; sneak into the victims home and wait for them to arrive, then shoot them that way, clean and simple. Well, not quite – which is exactly what happens in director Justin Rettke’s brilliant comedy Time To Kill. Partially written and starring Christopher T Wood, Time To Kill centres on a hit-man who is poised, secluded in the shadows and waiting for his mark. Unfortunately, it soon becomes a test of his patience when the person he is supposed to kill doesn’t arrive.

Time To Kill is a charming little comedy. Well-acted and wonderfully written whilst also steeped in beautiful cinematography, this off-beat but uproarious short film is both riveting, unique and transcends into pure hilarity. What starts off as an ordinary thriller quickly descends into fun as it captures that incessant drag of time waiting for something. Wood, as Harris encompasses the irritation and waning patience only with the added edge that he may kill someone when his task his through. There is a bitterness and loneliness that really comes through in Harris’ character that is masterfully done and will illicit many chuckles.