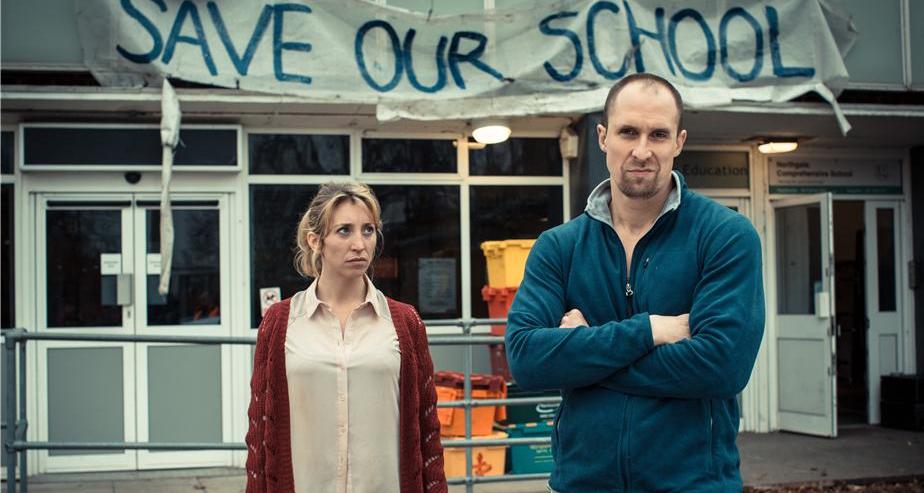 The saying goes; “it’s all fun and games until someone hurts themselves,” which general echoes out of the mouths of parents as soon as children enter the vicious world of playground antics. What they fail to mention is that the minute adults decide to play their own version of whatever, previously, naïve kid game, it turns into a bloodbath exceeding Battle Royale. Take Aneil Karia’s work in Tag. The innocuous and tame antics of dodging someone’s hand like they are about to unleash a hefty plague onto you was jovial at first. But the minute a Science Teacher and a PE Teacher take it upon themselves to make it brutal. The result? Well, you’ll have to see for yourself.
There isn’t much to enhance on plot in Tag, the simplistic nature of its creation is enough to enhance upon and adapt it brilliant for the BBC. Aneil’s work here is a cascade of adulterated fun that is hilarious because of the juxtaposition of grown up’s darting around a school, in front of students, in order to win. Though the game may, in turn, dissolve into petty violence, roping in children on either side to help score victory, the nature of the short is fun-filled and action packed.

Played greatly by Andrew Brooke (Phone Shop) and Daisy Haggard (Episodes,) this “tag for your life” shorts is oozing with hilarity and riotous behaviour. It also flummoxes you with appalling student behaviour that then twists the perspective onto the school children. Tag is fun and apocalyptic, intensely dramatic. And now you are all back at school (teachers and all) I hope you won’t do this…

Tag is available on BBC Iplayer.