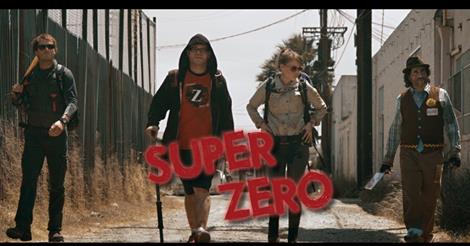 How would you survive a zombie apocalypse? Would you run for your life? Or maybe you’d hole yourself up with a lifetime supply of beans? Perhaps you, like me, will accept your inevitable fate and go out in a blaze of glory and epic one-liners, killing as many people as possible so that you’re loved ones could escape. Of all the endless possibilities of the eventual doom that will reap the souls of Earth, I bet the one thing you didn’t think off is having a debilitating spine cord disease that makes zombies believe that you are already dead. Enter the magnificent Super Zero.

The story follows engineer Josh who received a dreaded phone call: he is dying. After much contemplation, he has resigned himself to that and instead of living life to the fullest, he lounges around mulling over his misfortune. However, when a space rocket crashes back to Earth, it brings an extra-terrestrial virus along for the ride that turns the people into monsters the minute they come in contact with it. Josh, after be-friended a group of survivors including the love of his life, discovers that his machines make great weapons and his disease is an almighty plus.

Super Zero is the kind of short film that packs an almighty punch and is just begging for an entire series of fun and action. This could possibly be the best superhero origin story without there being dead parents or spider bites. Josh is the kind of character you immediately empathise with because he seems wholly realistic. He’s a nerd, spending the first half of the film being undeniably droll, sarcastic and lazy thanks to his lack of will to care. Helped by actor Umberto Celisano’s talent and a fully fleshed script, Josh is an amazing protagonist to follow.

Mitch Cohen combines different elements here to make it all work. Able to balance comedy and gruesomeness alongside a rather darker theme (dead man walking hero verses, well, dead men walking), Cohen’s awareness of small bites of fright and hilarity give Super Zero this fresh edge. It pulsates with this wholly original spirit that overblows on one component. Combined with a stellar cinematography, wondering machinery that has us nerding out and an abundance of great characters; this is Firefly meets The Walking Dead with just a little dash of Kick-Ass. Phenomenally done, Cohen’s Super Zero not only needs a huge fanbase – it demands it.
[youtube id=”zxzmcfgZd_0″]