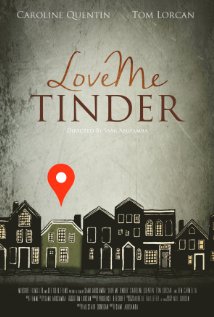 Some could say that dating in this day and age is a lot easier than before. Well, I wouldn’t say dating, which is as awkward as it’ll ever be, but I would say that finding a quick hook-up is certainly less of a pressing issue. Thanks to the uprising of technology, genitalia that wish to mesh with other genitalia is merely a button fwip away. Don’t get me wrong, this is a judgement free zone. After all, if you are both consenting adults and with more emotional depth than a stained metallic spoon – random fucking is fine and healthy. But sometimes, people get into these situations under false pretence. They think they are fine with one could healthy shag – but really, they are reaching out for a more visceral connection. And that’s the kind of aurora this new, excellently named short, is trying to capture.

Love Me Tinder stars the phenomenal Caroline Quentin and producer Tom Lorcan. A young has recently split up with his girlfriend and wants to explore his options with the titular dating app. He is paired with an older woman. But together, it’s clear that their desperation for some sort of human connection is going to make this date travel down the path of awkward.

Written by Alistair Donegan, directed by Sami Abusamra with Neil Gordon on camera, Love Me Tinder is a fantastic short that is brimming with incredible humanistic comedy that I feel only the British could truly muster. There are very little word said but each second is throbbing with this agonising embarrassment through either our leads not realising what they were getting themselves in for or the minute they locked eyes with one another, they realised it’s not quite what I wanted. Through Donegan’s script and Abusamra’s astute directing, the whole tone of the escapade is both sad sorrow filled and amusing.

What works is that, whilst Quentin’s Enya loving desolation hums off the screen in stomach turning awkwardness, she is never made to feel like a raw deal. Instead, it’s both of the leads insecurity of life and love that makes their misguided romanticism rub and therefore, allow the movie to spark. It helps that Lorcan and Quentin have heaps of chemistry together despite their characters not. They feed off the atmosphere and make it electrify with unease and humiliation.

Love Me Tinder has sweetness and sourness, all told alluring through the script and performances. It is a wonderful comedy that, if you have had a date like this, will rile up past memories of wretched emotional discomfort.