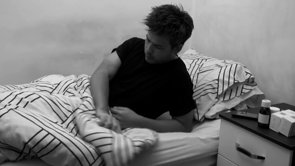 Unemployment is a hefty and heavy word that is placed on an ever rising number of people yearly. That excruciating daily weight drags you further down into the pits of despair with no ground to hit. You are floating in this miserable atmosphere believing on a daily basis that you are worthless, because you are jobless. And because of it, you are penniless, nearly homeless and you are soon to be hopeless. Taking that affix and making it titular, Ashlee Coughlan (from the great horror short “shhh”) is a small look into the turmoil that many unemployed people feel “…less” is the day in the life of someone unemployed and how they are constantly belittled, dragged down and made to feel less than human.

As someone who has battled against notions that I am equally lazily or apathetic because I have been unemployed, the emotions here are important and vital. Doused in black and white, giving it an added layer of dread is effective. The brilliant aspects is threading the visceral backbone into the imagery; a blurred face, a smashed laptop and relentless bills all mark pivotal emotional moments within our heroes life. There is also the added strong acting from Jason Perryman who accurately conveys the frustration and anger from a world repeatedly saying “no”.

However, that being said, “…less” suffers from being somewhat over sentimental with its storytelling and is hampered by shaky camera work.  It’s a good effort from the upcoming filmmaker but it’s not an incredible one, showing Coughlan just needs to hone in his storytelling skill.