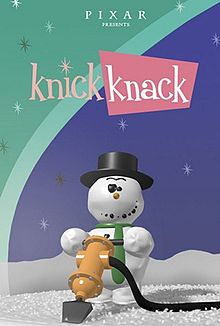 Pixar is one of those studios that will always be met with quiet admiration (or wide-eyed obsessive wailing). Their film portfolio is brimming with delightful and astonishingly visual movies that are created by clicking a mouse (which is a lot more hard work than that sentence made out). From the much beloved Toy Story series to the stirring Wall.E and all the innovative movies that came between, Pixar is often seen and revered as the greatest computer animation studios of all time. And quite rightly so. You cannot earn as many Oscars as the team has done without having a bustling array of talent and story-telling skills. However, as the ominously silent opening tells us, this 1989 short Knick Knack was one of the first shorts that John Lasseter and crew made. And because it centres on a Snowman, I am straining my article on it to cater to the Christmas season.

Knick Knack tells the story of souvenir brick-a-brack all lazing about on the shelf. Equipped with sunglasses, the bouncing palm trees, flamingos and a blonde haired woman all merrily dance with the spirit of whatever summery place  they were brought in. A Snowman, caged in his winter scene, looks on with jealousy and when he is invited by the beautiful lady, he endeavours to escape his lair in order to join the festivities. But the snow-globe is a lot tougher to break than it looks.

The story and the animation are, true, dated (you’d hardly get away with showing a Snowman who wants to bone a plastic big bosomed figure before you settle down for Toy Story 10 or whatever these days). However, there is a rambunctious spirit throughout it that relies on the old humour of films such as Laurel and Hardy; the film was openly inspired by Tom & Jerry too. Combining all the elements of slapstick and visual puns, Knick Knack is helped by the jovial antics that the Snowman goes through to escape his snow-globe cage. This has a fun element to it that will please audiences everywhere who wish to visit the small roots that this great studios began with. The inspiration for Toy Story is clear here (what with stationary objects springing to life) and it smatters of a happy and glee-filled origin for the animation giants that we hold in high regard today.