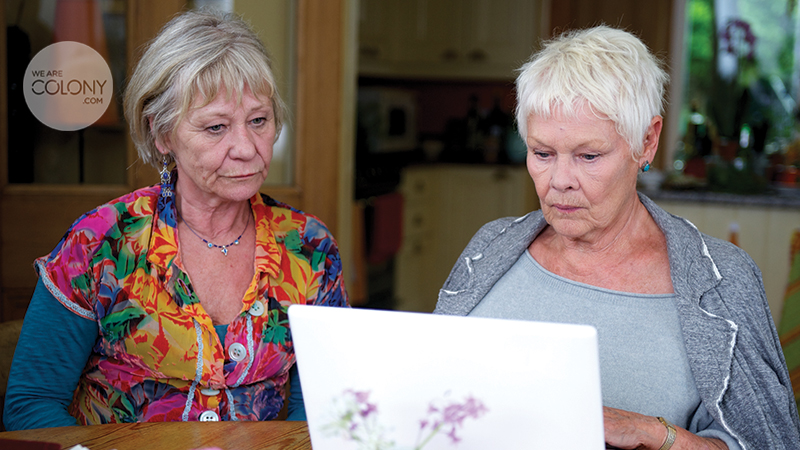 Many people say that there is a massive generation gap between technology and the elderly. Whether it’s the older group who believe that the younger are spending too much time on their laptops, smart phones and dingle-dongle devices or the younger believing the older are wrapped too much in their caveman like ways; there is maybe a definite separation. The divide in this ever expansive technological world could make life difficult for both groups. Well, not exactly. Certainly, there are technophobes out there but the generation gap? Bollocks. There are plenty of middle aged to elderly people who enjoy the social aspect of the internet and that is highlighted perfectly in Chris Foggin’s delightful Friend Request Pending.

Starring Judi Dench, Phillip Jackson and a wonderful little cameo from Tom Hiddleston, the movie revolves around Mary, a mature woman who is looking to find love on the realms of Facebook. Her chance encounter with a man and a couple of mojitos has her taking to the computer to reconnect with him. But can she navigate the new social constructs of this modern society?

The nuances of Friend Request Pending are what set this wonderfully quaint tale apart from the other doddering shorts. Though, similarly to Foggin’s That Night, the movie doesn’t have a major drama or crux to the tale, it is the astute human characteristics that pull along this jovial and charming piece. Brimming with charisma and rambunctious characters that are wonderfully realised, Friend Request Pending gets to small irritations and gleeful interactions of new relationships developed through social media. Foggin’s captures that spirit of tentatively waiting for electrical responses and that excitement of a blossoming new relationship.

Of course, a lot of that charm comes through from Dench’s empathic performance as Mary. Always one to capture the scene, she delectably weaves a pleasingly stirring character. Dench is as enthralling as always and is able to balance a wise yet youthful character. Alongside her is the reserved and fantastic Phillip Jackson as the admirer Trever and the hilarious Penny Ryder as Linda, Mary’s best friend, who bounces greatly off Dench. The cast really band together to create an astute portrayal of relationships and technology, no matter what age.

Again, Foggin’s has captured a dreadfully appealing piece. Friend Request Pending is a pleasing short that has spirit, wit and superb performances.

You can watch Friend Request Pending on We Are Colony now.