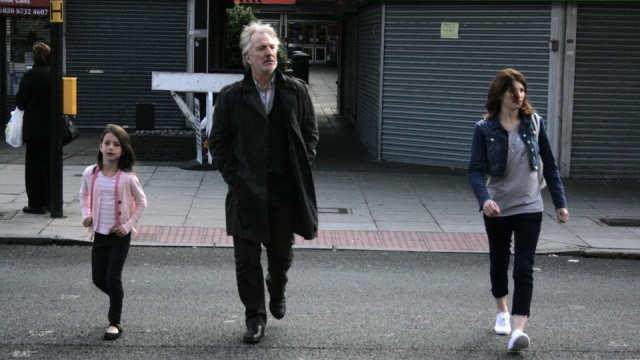 There is always something so special when a big named celebrity goes into a short. Not because they have star power to levitate the short and bring a certain panache to proceedings that relatively unknown talents lack (that’s not saying that unheard actors aren’t fantastic enough to bring a level of intensity and acting skill that will leave you speechless). It’s mainly because short film is often a waylaid art form that lacks investment and has a tiny audience unless it is sandwiched on a late night channel or before a main feature. When people like Alan Rickman grace a beautiful short named Dust, you know that more people will flock to the medium and watch more, levitating short film makers into a grander audience.

Dust, directed by Ben Ockrent and Jake Russell, is the perfect example of how to compact an inventive and fresh story into the space of seven minutes. Rickman, more famed for roles such as Hans Gruber and Professor Snapes, plays an unknown scruff of a man who observes a young girl and her mother and follows them home. It’s there where events take an unusual turn.

The tone of bleakness is handled extremely well. Playing with many themes that burn inside the viewer’s mind the minute an old man clocks a young girl, Ockrent and Russell intellectually play with the underbelly of worry we all have stirring beneath us. The sinister backlash of the audiences psyche is key to developing surprisingly tender short into something more magical than we first deemed possible. Helped by the minimal dialogue and the stellar score by musician Neil Myers (that very much harkens to Clint Mansell and John Murphy,) Alan Rickman’s role here is twisted into something more beautiful and different. It’s this uniqueness and the adept way that Ockrent and Russell handle the subjects present that give Dust this shot of ingenuity. Simply put, Dust is eloquent.