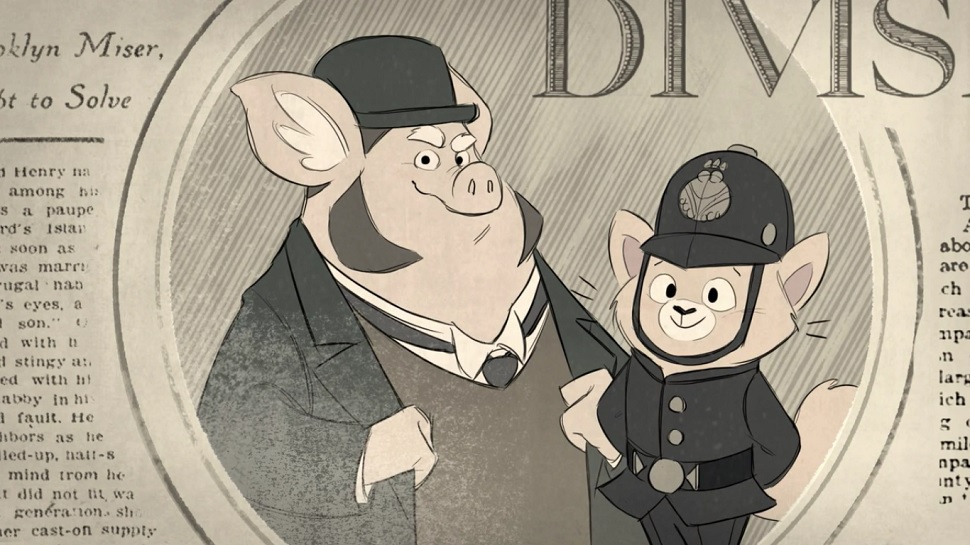 Hand-drawn animation is not dead. Though it may seem that all the big companies of children’s art have leapt from the sinking ship of pencilled artistry to the bigger ease of computer animation sailing, there are still a few films out there grabbing an oar or two and sailing evocatively on. For example, the work of Tom Moore with the recent yet utterly sublime animation Song of The Sea has proved wondrous against a whole sea of pixels…It seems there is a new resurgence of for hand-drawn artistry and even in our short films, the need for quirky or wholesome cartoons is captivating audiences. Which is why the charming The Casebook of Nips & Porkington is so lovely to watch.

This imaginative short is based in Victorian London and sees two cartoon characters, a police officer kitten and a detective big try to solve the case of a missing goose egg and comes across a literal rat in the system. Can they catch the culprit and save the egg?

Warming and fun, this adorable short film is wildly vivid as it is set against a backdrop of Victorian newspapers that feel reminiscent of the era. As the crime takes them across the print media, the design of the movie has a kinetic energy that rambunctiously send the audience on a wild adorable ride. Like a Disney short at the beginning of their feature, The Casebook of Nips & Porkington captivates with an adoring palette akin to the era. Visually, it’s impacting in the way that cartoons can be – an impressive story with a charismatic tale at the core of it, this is an adventurous three minute short animation is truly inspiring.

Ok, so the animation was created through computer techniques but the spirit of hand-drawn animation is there and it is clear a lot of effort has been put in by doing something original and unique. Director Meloday Wang has a style and it is implemented here so amazingly well that it’s heart effervesces like classic family films would yet with this modern edge.. Added to a delectable bouncing score by Xintong Wang, the film is incredible and wonderful. A simply must see.