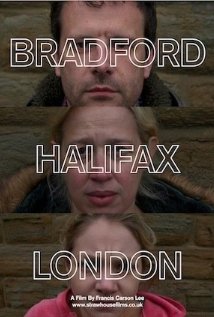 There is always something so special about watching a couple arguing. Not in complete full blown anger, sure, but that special gritted teeth heated conversation as irritations come to a boil. You know they really love each other and you know they care. But they’ve been so flummoxed by the day’s events that they are overcome with annoyance and spews into this tiny little argument, frothing at the mouth to get every last bit of frustration out of their system. They are fun to watch, and if done well in cinema, make great viewing. Bradford-Halifax- London is an example of capturing a sort of human spirit on film in this delightful short by Francis Lee.

Filmed in a complete one shot – this continuous take allows our small trio of actors to amuse as a family of three heading to London for a wedding. However, a series of mishaps has caused a bout of tension and no sooner have they plonked themselves down then the parents are laying in to each other. Causing much embarrassment to their teenage daughter, can the pair reconcile for a pleasant train journey?

Bradford – Halifax – London is a train journey full of humanity and realism, as anyone who has had that kind of public “talk,” will contest. It is impressively done with a camera in one “locked off” position that remarkably enthuses this film with a grand sense of voyeurism and observation. With a witty dialogue that feels fresh and realistic, this incredible short is excellent and makes hilarious viewing. Shown at UnderWire Film Festival this week to celebrate Katy Cavanagh’s strong performance as the mother, it’s not hard to see why the Coronation Street star has been praised. Though the bulk of dialogue is taken by the wonderful Paul Barnhill’s father who excels in comedic timing and deliverance here, its Cavanagh’s true to life reaction that tickles the audience. Her contorted facial reactions, heavy sighs and clear pregnancy discomfort titillate. She enthuses the film with a sense of realism and it’s pure joy.

Francis Lee’s quaint and amazing little short is a tableau of human life played for the audience to see. Feeling much more as though you had stumbled awkwardly on a family’s domestic rather than watching a creative and inspiring film, Bradford – Halifax – London is an enjoyable and fun short, capturing a wonderful essence of life.