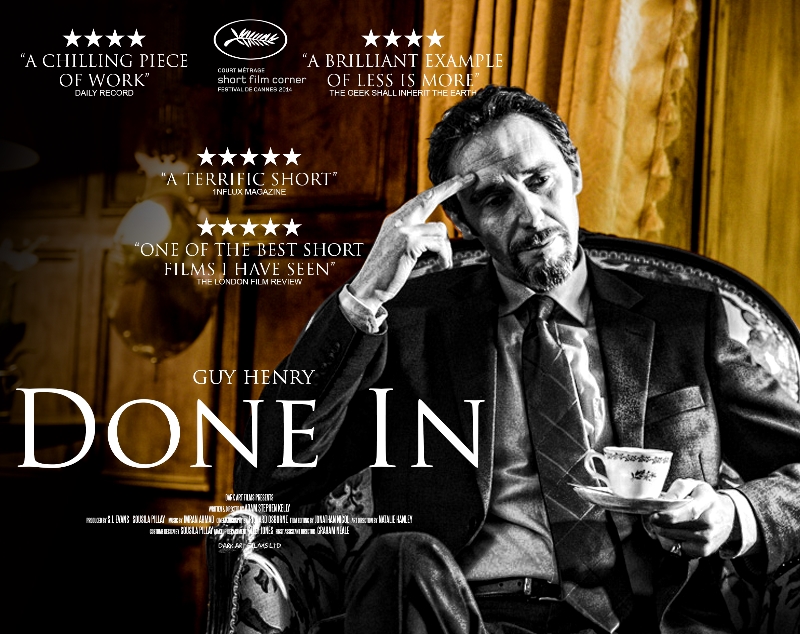 A couple of months ago we were really taken aback by a certain short film. Once you’ve been in the industry, doing the bulk of work I have been doing, you find that more and more, it becomes a rarity to be floored by a film. Especially a short one. But when Adam Stephen Kelly’s thrilling tale Done In fell into my lap, I was pleasantly surprised and haven’t stopped talking about it since.

Starring Guy Henry, of Harry Potter and ‘Holby City’ fame, Done In is a tender portrayal of a man recounting his youth as he dictates his suicide note. Screening at many festivals later this year and having made a splash at Cannes 2014, Done In is a superb effort from Kelly and denotes a perfectly stellar career start. Luckily enough, I was able to catch up with the up-and-coming director and pick his brain…

What inspired the short?

That’s an interesting question, I have no idea where it came from. I had written short films and feature screenplays before and one day, I sat down and needed to write something that I wanted to direct. Obviously, it being my first time, I wanted to start small (about 5-10 minutes long) and being a life-long horror fan, I knew it had to be in that genre. But I couldn’t think of anything I’d like in that amount of time. I had the title and discarded idea after idea. And then, Done In just flowed out of me.

Without giving any away, and I am being very tentative with details here, how did you manage to implement the ending?

The idea came out of nowhere but I had thought of it first. It became more about building the story around it. The film needed to be as good as the finale. The entire thing needed to be strong.

Funnily enough, he was the person I had in mind when writing the film. But we had never had him on the shortlist. We really wanted talented actors to carry the role and luckily for us, we were put in touch with his agent and he loved the script, coming on board. To work with, he was incredible, a dream really. It was the perfect fit.

How did you find the gorgeous location, Nash Manor in Cardiff?

My producer is up in Wales. He knows all kinds of people and set up a large list of locations that were perfect on the outside but they needed something special on the inside. It had to be specific to what I envisaged. It was everything I wished it could be. The locations were fantastic despite being available for filming, no one had shot their before! It lends itself to the style of the film.

You smashed your Kickstarter campaign, how was the response from that?

Kickstarter took two campaigns. The first didn’t go so well as I had never delved into it before. But you learn your lessons, you have to keep your head on and see what goes into a crowd funding campaign.  We took it away and improved it. The success has been phenomenal. It’s surprising because crowd funding is popular and millions of new projects go on everyday. It’s wonderful to see the response in the midst of that.

What reactions have you had around the festival circuit?

The first festival we did, and have just submitted, was Cannes. When we were accepted, we were thrilled; it being the biggest festival there is. Now it’s just a waiting game. There is a bit of gap and there will be lots to enter come autumn as they are screening around award season. The reaction has been strong. Coming from a film journalist background and writing about film, I’ve been more terrified to receive reviews myself. It’s a different experience.

As someone who is interested in doing both, how do you balance working on film and being a film journalist?

It’s interesting, the sites I have worked for have both reviewed Done In. Seeing it on the sites was just outstanding. It’s all a matter of time, trying to get the projects going whilst working on my own personal ones. It’s a great transition and I met my producer through writing a review on his work. If it wasn’t for film journalism, I wouldn’t be in the position I am in so I am very thankful.

How about the transition from working as an executive producer on other projects to producing your own?

I’ve only had very small roles in obscure horror films apart from the recent Top Dog. I spent three years in a production company, working in development and packaging projects, putting them together for other producers and investors. It is important to strike up the relationship and my skills as a producer have helped me with that. It’s a difficult transition getting to more of a big scale and forefront position. One thing I have been taught is that I am very impatient. Filmmaking takes a a lot of time and you have to put stuff on the backburner. I learnt a lot from being a producer.

Does this inspire you to make feature movies? Is that a direction you are heading in?

I think the aim is always to make a feature. There is something special about writing your own script and developing them. The problem is, making a feature is a longer process. We shot Done In over two days and THAT was intense. I’d have to prep myself into making something longer. We’ll see what happens. After all, it’s a filmmaker’s cliché, carrying your child around for 17 months from script to screen and seeing how people react. A feature is on the cards but it takes a lot of preparation.

Previously underfunded and unsupported, do you believe there is a rise of short film?

I would say so to a degree. There is a lot of support from crowd funding for shorts. Going back to that, it’s still in its infancy and gains mainstream from people like Spike Lee and Zach Braff using it for projects. There has been a lot of interest from filmmakers around the world, like myself, that this is a good opportunity to raise and finance a film. It’s realistic too. Not everyone can reach into their pockets and make a film for £5000. This digital age makes it easier for shorts to be made. So yes, there is a bigger wave of films coming soon.

We’d like to thank Adam for his time and remind you that Done In will be heading to a festival near you. Make sure you are first on board for Adam’s stellar career path and you can read our five star review over here!