In Wish Upon, Clare (Joey King),a teenager who is struggling during her time at school, discovers a mysterious and magical box that grants her seven wishes, but at a deadly price.

Despite an intriguing premise that reminds us to be careful what we wish for, the only thing you’ll be wishing is for Wish Upon to end. It offers plenty of teen frights and easy jump scares, but the failure to deliver resonating frights makes Wish Upon a mediocre and forgettable experience.

Wish Upon is mostly predictable and cliched. Clare’s wishes refrain from being anything other than selfish desires, painting her as a stereotypical teenager whose only wants are those of love, popularity and revenge. She is characterised in the most basic sense and reduced to an idea, rather than a reflection of teenhood. Surely, fifteen year-olds crave more than the undying love of the hottest boy in school and a quick fix to be rich? Alas, Clare’s wishes are basic and expected, constructed only to allow for her downfall.

Neither the frights or the plot are particularly memorable with the blend of Final Destination‘s dread and a more general sense of supernatural foreboding. The moments of terror are built around the ominous consequences of Clare’s wishes, but are executed with very little creativity. A voyeuristic POV shot will follow the box’s victims during their final moments, before an ominous fate takes control and leads them to their doom. There is a certain amount of tension during these moments – as with Final Destination‘s entertaining take on an unstoppable Death – but, that feeling of familiarity prevents any ground-breaking fear. 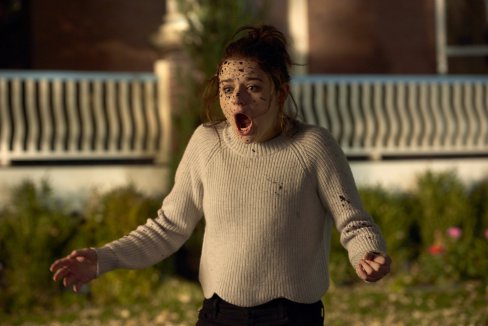 Much in the way that John R. Leonetti‘s previous spooky endeavour Annabelle was hindered, there is very little energy behind the film’s events. An injection of vigour is desperately needed, but Wish Upon maintains an unsatisfying level of deflation. There is no urgency felt when Clare realises she has made huge errors with her wishes and that feeling of predictability rears its head when you remember that these mistakes will be impossible to undo.

For all its predictability and overwhelming sense of “been there, done that”, Wish Upon is more than watchable. Sure, it doesn’t offer much that’s new, but Joey King manages to hold the film together with her gutsy and energetic performance – even if the film around her almost falls into a dreary abyss. As a flawed combination of Final Destination, The Butterfly Effect and Drag Me to Hell, Wish Upon is an averagely entertaining teen scream.

Wish Upon is out on 28th July.

In this article:horror, Joey King, Wish Upon