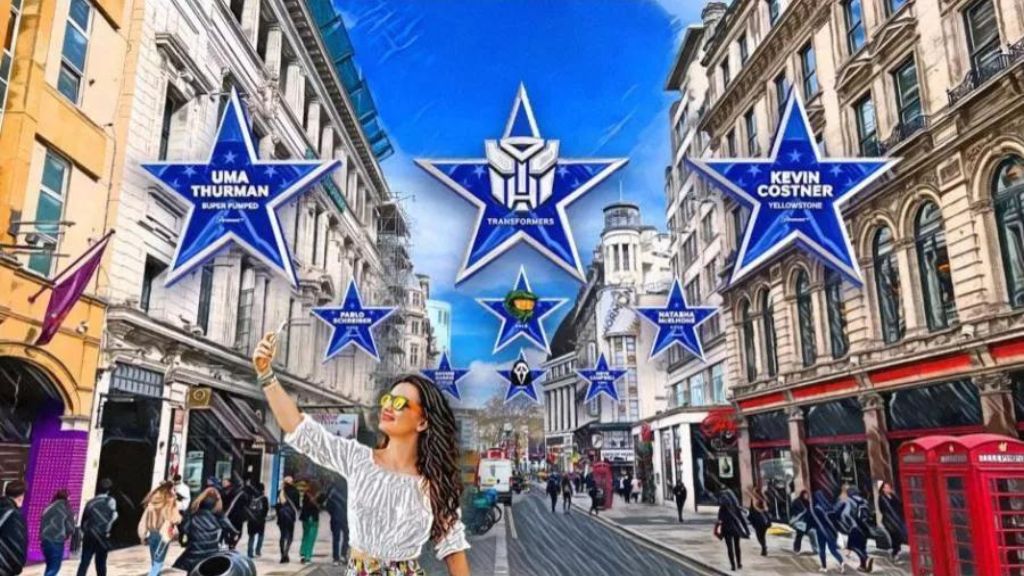 Just T-minus two days and counting until Paramount+ rolls out in the UK, the global streaming service has today announced having greenlit a seven-strong international slate.

Meanwhile, Paramount+ has also descended on London’s West End from today to play host to a series of installations, pop-ups, and activities bringing some of the world’s most recognizable stars and characters to the capital, including the likes of including Sylvester Stallone, Jessica Chastain, and Gillian Anderson.

The highlight of the event will be the ‘Walk Of Stars’ – showcasing superstar talent from Kevin Costner to Naomie Harris, that will see 42 illuminated stars hang above the district’s streets. The interactive experiences will take place between June 23 and July 4 and all events and locations will be free for the public to attend – though tickets do need to be reserved in advance here.

Commenting on the streaming service’s expansion, Executive Vice President and International General Manager of Paramount+ Marco Nobili said, “Paramount’s story began with the longest-running studio in Hollywood, and today we span the globe with our worldwide production studios that create hits for audiences around the world, which now live all in one place: Paramount+ … As the service continues to expand internationally, there’s a great opportunity for content to travel globally, opening up a world of opportunities for talent and creators.”

A 4-part docuseries recounting the murder of Italian fugitive banker Roberto Calvi, whose body is found hanging off a London bridge. Although his death was initially declared a suicide, it is later uncovered that many wanted Calvi dead. He had presided over the collapse of a major Italian bank whose largest shareholder was none other than the Vatican. This revelation blows the lid off the secretive world of the Vatican’s financial system- a world populated by priests, mobsters, and neo-fascists. What looks like the simple story of a dead banker becomes one of international intrigue. The docuseries will debut on Paramount+ in all international markets.

An 8-hour young adult fantasy-horror thriller based on the novel “Marie Antoinette Serial Killer” by author Katie Alender. The series follows four young American girls on spring break in Paris who, while exploring the edgy side of the city, find themselves caught up in a mysterious, almost supernatural murder spree that soon becomes very personal. Could the murderer be the ghost of the late Queen Marie Antoinette? And why is it chasing them? The series will debut exclusively on Paramount+ in France and all international markets.

Young “hacktivist” twin sisters Anna (Saskia Rosendahl) and Benni (Hanna Hilsdorf) are inseparable in their quest to expose environmental wrongdoing by any means necessary. But when their hack into a government server leads to a police raid, Anna is captured and Benni disappears into the underground. When it becomes apparent Benni is lending her skills to a radical new terrorist group that does not shy away from violent action against state and corporations, the sisters suddenly find themselves on opposite sides of the question: What line are you willing to cross for something you believe in? “A Thin Line”· will debut exclusively on Paramount+ in all international markets.

Inspired by true events, “The Sheikh” tells the story of a one-of-a-kind con artist. Ringo (Björn Meyer), a simple man ridiculed as the village idiot in his hometown, reinvents himself as the heir of an Arabic fortune. With nothing but a bunch of tall tales and a fabricated bank statement for $8 billion, he becomes every Swiss investor’s dream, bringing Switzerland’s political and economic system to the brink of a national crisis. Created and written by multi-award-winning filmmaker Dani Levy (Alles auf Zucker!, Die Känguru-Chroniken), who directs together with Johannes Naber (Curveball, Zeit der Kannibalen), and stars Petra Schmidt-Schaller, Sylvester Groth, Carol Schuler, Philippe Graber and Pasquale Aleardi in additional roles. The tragicomic series will debut exclusively on Paramount+ in all international markets.

CIRCEO tells the story of the aftermath of the crime that came to be known as “The Circeo Massacre”, which upset Italy in the 1970s, after two teenage girls were found in the trunk of a car in Rome, naked, wrapped in blankets and drenched in blood. One was dead, the other one alive. Focusing on the trial that followed and centering on the lone surviving victim, Donatella, the series reflects on a watershed moment in the path of the emancipation of Italian women, demanding (and eventually obtaining) the wholesale revision of laws on sexual violence. “CIRCEO” is written by Flaminia Gressi, Viola Rispoli and Lisa Nur Sultan and directed by Andrea Molaioli and will debut on Paramount+ in France and GSA.

Starring and produced by John Leguizamo with Frida Torresblanco also producing, this narrative series will chronicle the fascinating yet volatile life of El Chapo’s infamous Beauty Queen Bride, Emma Coronel – an innocent farm girl turned fierce icon who rises to become Mexico’s most formidable crime wife. A story of love, sex, drugs, and danger. Produced by VIS in association with Braven Films, the series has been greenlit for development to debut exclusively on Paramount+ in Latin America and all international markets.

A suspense thriller movie that centers around seven people who are kidnapped and suddenly find themselves part of a deadly game. As the clock ticks, to survive the seven participants must choose one to die and the chosen one will have to agree. Starring Manolo Cardona, Maribel Verdú, Carla Adell, Juan Carlos Remolina, Adriana Paz, Dagoberto Gama, Fernando Becerril, and director Manolo Cardona, “One Must Die” will debut exclusively in all international markets.