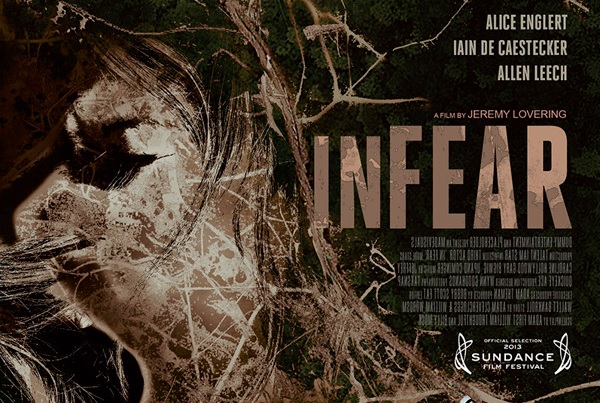 The atmosphere was electric with anticipation as people started spilling into the UK Premiere of TV director Jeremy Lovering’s first feature – In Fear. Earlier this year, In Fear was rightfully selected for The Sundance Film Festival, where audiences and critics alike took an instant liking to this minimalistic horror.

After being supplied with endless amounts of champagne we were ushered into the quaint screening room at the ICA (Institute of Contemporary Arts) in London. Firstly, Jeremy couldn’t look happier to be there and gave a touching speech, thanking everyone who made this film possible for him. Turning to the cast we had the honour of hearing a few words from leading lady Alice Englert (Beautiful Creatures and Ginger & Rosa). Here Alice takes on the role of the modest, prudent Lucy, who again seemed delighted to be here in London (donning a spectacular black dress) and didn’t give any hints away about the film! Downtown Abbey’s Allen Leech, playing Max was also amongst the talent but after a quick ‘hallo’ made a swift exit in order to catch his train. There was a distinct absence of Iain De Caestecker (Agents of S.H.I.E.L.D, Filth) who acts directly alongside Alice as Tom, due to him being in the States.

After a few comical retorts about rambling on too quickly, Jeremy mentioned that during filming he withheld his script from the actors, leaving them completely unaware of what was going to happen throughout filming. Laughing to himself, he stated that when you see the fear on their faces, it is genuine fear! (as Alice nodded frantically). After hearing that such a technique was implemented, I was somewhat intrigued to see it translated on screen – the result is exemplary.

In Fear tells the story of a new ‘couple’ Tom and Lucy, as they make their way to a music festival in the idyllic setting of Ireland. Although filmed in Cornwall, the remote roads and scenic views make a good substitute as they try to follow signs to a hotel in hope of a romantic evening. Finding themselves lost in an un-escapable maze, their primal fears of the dark start to consume them, turning them against each other. Tormented by a masked stranger, Tom and Lucy find themselves facing their worst fears.

In a nutshell, In Fear is possibly one of the best horrors of 2013. This is a perfect example of a low-budget production utilising minimal resources to their full potential. With eerily filmed claustrophobic camera angles aided by a pounding score filled with suspense, In Fear will not disappointment. A concept that isn’t new to our screens, yet the delivery is something quite powerful.

In Fear will land in cinemas tomorrow, Friday 15th November and to get you all geared up we’ll leave you with a trailer.