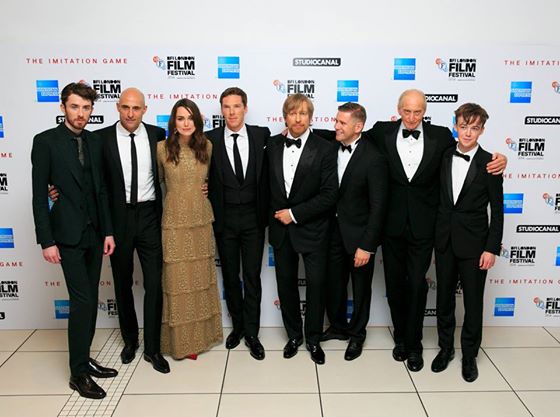 “I adore you, and I’m really, really grateful for your support, and I hope you enjoy the film.” Cumberbatch shivered down the microphone as the heavens above drenched the red carpet. For hours, for some up to thirty, a Cumber-collective had gathered to meet the acclaimed and talented star, and even the press were drenched with excitement over the event. As many stood the test of tentative weather patterns, the glamorous stars somehow managed to look exquisite despite the loss of umbrellas and windy antics. After all, what red carpet event can beat the opening gala night of the BFI London Film Festival? And with The Imitation Game being the film of the night, it was a very British affair indeed.
A truly elegant film with a master-filled performance from Cumberbatch, The Imitation Game has been met with much furore already. The telling of Alan Turing, a genius and mathematician who helped solve the enigma code but was persecuted for being homosexual, has had much critical acclaim that tinged the atmosphere with excitement as the score hummed through the air. Highly anticipated before word of mouth spread the brilliance of this movie on a global scale. And to pair it with the tantalising and prestigious London Film Festival seems like a match made in heaven.

“It’s a very British premiere to open a very British festival and the heavens have opened, it’s all very British” says Clare Stewart – the head of exhibition in BFI. If you are excited for all 248 films that are showcasing over the next two weeks in the heart of the capitol, then it’s her you have to thank. As she walks the red carpet, despite the heavens raining down on us, she is poised and exhilarated by the fact that her hard work is coming together. Wearing a white and black dress and talking extremely passionately about her love of film, Stewart has high words for The Imitation Game, “Of course, it has this overseas element to it. It was written and produced by Americans and we have that Norwegian spirit with Morten. They’ve all produced this phenomenal movie.”

Interestingly, The Imitation Game isn’t the only movie based around the Second World War, and Clare’s fantastic festival closes with David Ayer’s Fury which centres on the front line soldiers. “It wasn’t a thought through choice, much more of a coincidence.” She says, praising the talents of the filmmakers, whoshe states are the first things she considers in choosing films. “But people are turning to focus on the efforts of those who fought in the war and that’s great to represent these stories untold. We’ve also got Testament of Youth, the Vera Brittain story which conveys the First World War, too. It’s fantastic to convey these stories.

But tonight’s story is penned by Graham Moore, one of those Americans who has brought to life this British story. At merely 28 years old, the young screenwriter is perhaps best known for television series 10 Things I Hate About You and Best Seller book The Sherlockian. So it’s apt that he has penned The Imitation Game, adapted from Andrew Hodges story Alan Turing: The Enigma. As he comes over to answer a few questions, he is drowned out by the squeal of excitement from the fans as Benedict Cumberbatch emerges from the car, “this is my life at the moment, every time I go to speak it’s all excitement for Benedict,” he jests happily before divulging about the obstacles he may have faced when creating The Imitation Game; “doing research on the war and Bletchley Park is difficult because we don’t have that anymore. That scene where they are burning everything, that actually happened, so we had to make a guess on what we did have.”

Moore found himself drawn to the Turing story all of his life, “You know, I grew up into computers – I was a computer nerd – so his story really captivated me. That topic of who he was and what he did for the war and how he was mistreated, I read the book and knew I wanted to write about it.”

Putting his script into the hands of fantastic director Morten Tyldum is a fantastic achievement for the script writer, who found that the spirits of both he and Tyldum worked really well. “We have very different styles and aesthetics but he is such a cool guy and he is whip smart.” Moore enthuses empathically, “He’d calm me down because I’d have so many ideas and he’ll turn around and say, ‘that won’t work on screen.’”

Talking about Tyldum, the Norweigan is making his way down the red carpet suited and booted for his very first English speaking and British film, “I couldn’t have jumped further away from my comfort zone if I tried,” he laughs as his previous films include the critically acclaimed Headhunters, all in native tongue. Here, with The Imitation Game, Tyldum kept it filmed in London.  “I wanted to film it in London, keep the bombed out feel to it was well as keeping it focused on Bletchley Park, it’s nice the premiere is bringing the film back on home soil with this character driven movie.

Speaking about what drew Tyldum to the script, he echoes the theme of tonight – that Turing’s persecution was unjust- and tonight, we are honouring his work. “I was sent the script, which blew me away because I knew so little about it – he wasn’t on the front cover of my history books when I was two,” Morten says to enthusiastic agreement from the press who were equally swept up in his story, “I became obsessed; he was such an unsung hero. He theorised the first computer at 23 and broke the Enigma machine, saving millions of lives. But it was kept locked away and he was prosecuted as a gay man and sent for chemical castration. It’s heart-breaking but very touching, I feel honoured and privileged to do this film about a man who knew so little.”

The man who has the difficult task of decoding such an enigmatic character is Benedict Cumberbatch, who is flitting between press and his excited fan base, all screaming to get a little scrap of attention from the world’s hottest star. As he quickly trundles through questions, each microphone and thrilled reporter vying for his attention (and two possible fan-girls, myself and the Chinese reporter beside me, who found themselves in the press pen), still, armed with a bottle of water to verbose his enthusiasm of being in the film, Cumberbatch is ever the suited gentleman. “I loved the brain and personality, his complete character is engaging and I wanted to portray that,” says Cumberbatch surrounded by a flurry of cameras and lights (how he does this so often, so poised and polite, is a wonder in itself). Continuing, but very quickly as he is already running late for his own film, Cumberbatch says “He is extraordinarily under-appreciated. I wanted to do him justice because of what he suffered, and hopefully, we have.”

Assuring us that Turing would love the technical side of social media and all its functions in today’s society, Benedict rushes to sign as many autographs as possible for fans before being taken inside to enjoy such a glorious film. With one final thank you to a reporter who graciously congratulated him on a fantastic performance (me), it’s time for The Imitation Game to make its British debut.

The Imitation Game is out November 14th. Read Cookie’s review about it now!