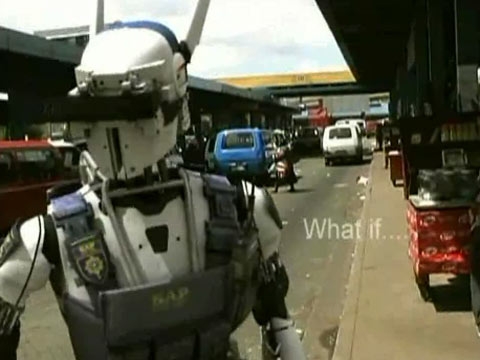 Further to the addition of cast member Sharlto Copley, another heavyweight has just been confirmed for Neill Blomkamp’s next feature, Chappie.

In a recent press junket in promotion of Prisoners, Hugh Jackman confirmed his attachment in a supporting role for Chappie which follows an android police officer stolen by criminals to use it for their own dealings.

Jackman revealed that he would be shooting the feature film, based on one of Blomkamp’s own shorts, Tetra Vaal, in Johannesburg for a couple of weeks, early 2014. Written by Blomkamp and Terri Tatchell (District 9), the director recently described Chappie as “a comedy, a heartfelt story, in a science fiction setting.”

Whilst Jackman couldn’t reveal any specific details regarding his role, he is rumoured to be playing a “resourceful” CEO with a grudge against the robot plundering criminals.

Die Antwoord rap-rave duo Ninja and Yolandi Visser are also confirmed to have parts in the film whilst another name recently attached to play the lead human role in Chappie was Dev Patel (Slumdog Millionaire) but there has been no recent news so it is still unknown as to whether or not he has since been tapped for the part or moved on.

Whilst Jackman can currently be caught taking justice into his own hands in the Denis Villeneuve thriller Prisoners he will soon be reprising his signature Wolverine role in X-Men: Days of Future Past.

Chappie is slated for a March 27, 2014 release date in the US with the UK date yet to be confirmed. We’ll leave you with the short film that the feature is based on: