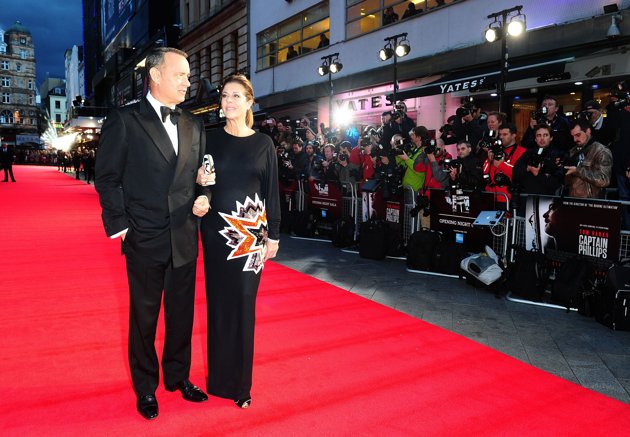 Granted, Tom Hanks has had a rough week in the light of the news of his type 2 diabetes but the 57-year-young actor clearly set all of his worries aside as soon as he stepped onto the red carpet for last night’s European premiere of Captain Phillips.

Last night’s Gala was also attended by the film’s director Paul Greengrass, as well as a plethora of stars including actors James Nesbitt and Dexter Fletcher and fashion designer Tom Ford.

This year Hanks will serve as bookend to the festival with his performance as Walt Disney in Saving Mr Banks closing this year’s event. A celebration will also be held to celebrate his career in cinema by BAFTA which the star will also attend.

We’ll leave you with the highlights of last night’s event. Don’t forget you can read our 5 star review of Captain Phillips right here.

CAPTAIN PHILLIPS is director Paul Greengrass’s multi-layered examination of the 2009 hijacking of the U.S. container ship Maersk Alabama by a crew of Somali pirates. It is – through Greengrass’s distinctive lens – simultaneously a pulse-pounding thriller and a complex portrait of the myriad effects of globalization. The film focuses on the relationship between the Alabama’s commanding officer, Captain Richard Phillips (two time Academy Award® winner Tom Hanks), and his Somali counterpart, Muse (Barkhad Abdi). Set on an incontrovertible collision course off the coast of Somalia, both men will find themselves paying the human toll for economic forces outside of their control.