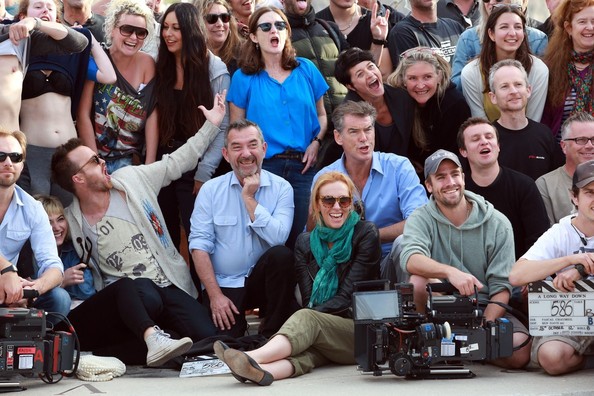 A Long Way Down, based on Nick Hornby‘s novel of the same name and starring Aaron Paul and Pierce Bronson has its first trailer. Initial reactions are thumbs up as we see Aaron Paul in something other than ridiculously oversized tops and continuously blazing throughout this feel good narrative.

A Long Way Down tells the story of a chance encounter between four strangers on New Year’s Eve. Except this isn’t the normal meet up on a rooftop where the four are prepared to jump to their deaths? Normal? I think not and once they are all up there they get chatting – naturally.

The four consists of a single mum, a struggling musician, a troubled teenager and a disgraced chat show host who all want to end it. Except after a few chats they decide to make a pact that they will all jump at the same time and postpone their suicides until Valentines Day. After this, from what we can see, they have a crazy adventure with each other over the next month and a half.

Pierce Bronson, Aaron Paul, Toni Collette and Imogen Poots are the strangers brought to life by Jack Thorne‘s script. Pascal Chaumel‘s direction may come off a little cheesy here but, after all, this looks to be a real feel good film, hopefully with some laugh out loud moments!

Catch A Long Way Down in cinemas March 21st – for now check out the trailer after the JUMP.