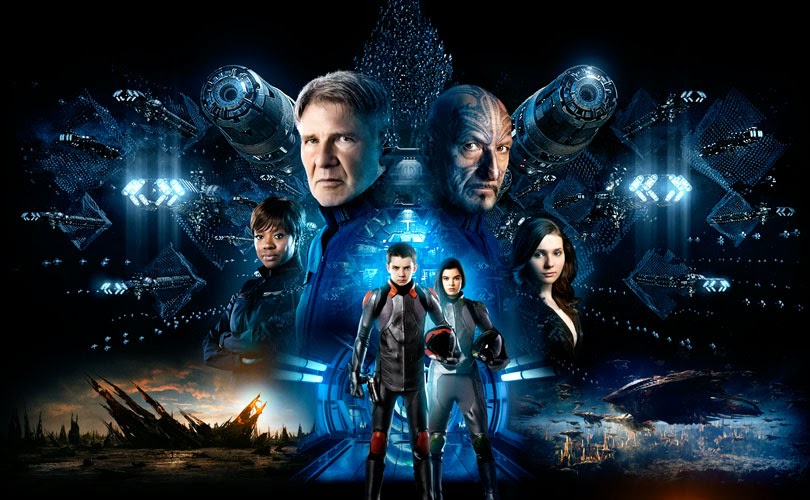 If you haven’t heard of Ender’s Game yet, you must be living under a rock. Written in the eighties, becoming an award winning best seller and part of American curriculum, the novel written by Orson Scott Card is well on it’s way to icon status, and now the first ever adaptation is due to hit the big screen on October 25th, starring a star studded cast, including the one and only Harrison Ford in his first sci fi excursion since Star Wars. He explains how the sci fi genre has so much more to offer than movies that stick inside Earth’s atmosphere. 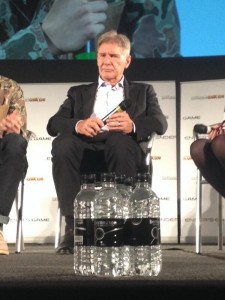 Either very thirsty or very happy to see me.

‘A realistic film on Earth only has a certain visual potential,’ says Ford. ‘But when you get into the future it broadens. You can imagine things, and this book, 28 years ago, imagined the internet, touch screen technology and spread out warfare which is now all part of our lives, for better or for worse. There’s a lot of understanding in the book and potentially we’ve captured quite a bit of it. Well I hope so.’

The story, based in the future where the human race fought against an insect-like alien enemy named the Buggers, is focused on Ender, a highly intelligent six-year-old boy who is chosen at an early age to attend Battle School for children. Since the Buggers already know all of the adult strategies, the genius bunch of kids are relied on to eventually command and beat the possible second attack from the Bugger race. Ender, who has quite the chip on his shoulder for being the technically illegal third child in a ‘two children only’ law and the object of constant abuse at the hands of his psychotic older brother, excels at the school, flying up the ranks. Despite his young age in the novel, the Director (Gavin) made the decision to make Ender considerably older by casting Asa Butterfield (The Boy in the Striped Pajamas, Hugo) in the coveted role.

‘He sent me a fantastic audition tape from London, and at that stage we were auditioning a lot of actors,’ says Hood. ‘As you know, when the story takes place in the book he’s six years old and he’s 13 by the end, so I decided we needed to compress this into a year so we wouldn’t have to change actors. So we auditioned children ages 7 to10 and let me tell you, we had some talented little eight year olds. But when that eight year old came up against Colonel Graff (Harrison Ford) and he’s going ‘I don’t want to listen to you!’ it was just horrible. I thought we have to go a little older. Asa sends this audition and he’s highly intelligent, he’s a lovely guy, he’s on that border of boy about to become a man. I’m so glad I had Asa and Hailee.’

The cast is full of star studded names, including Ben Kingsley, Abigail Breslin and Oscar nominee Hailee Steinfield and despite the surrounding controversy due to Scott Card’s controversial anti-gay rights activism, the movie is set to become this year’s must see blockbuster. Not just because of the special effects, but also because of the beautifully realised characters that are brought to life on the screen.

‘There’s this epic sci fi adventure but if you look closer there’s so much more than that,’ says Butterfield. ‘Keeping all those ideas intact was a challenge and keeping it together and true to the book, it’s a really interesting idea.’

We’ll leave you with a trailer for Ender’s Game which hits cinemas this October 25th.

In this article:Ender's Game, Fan Event