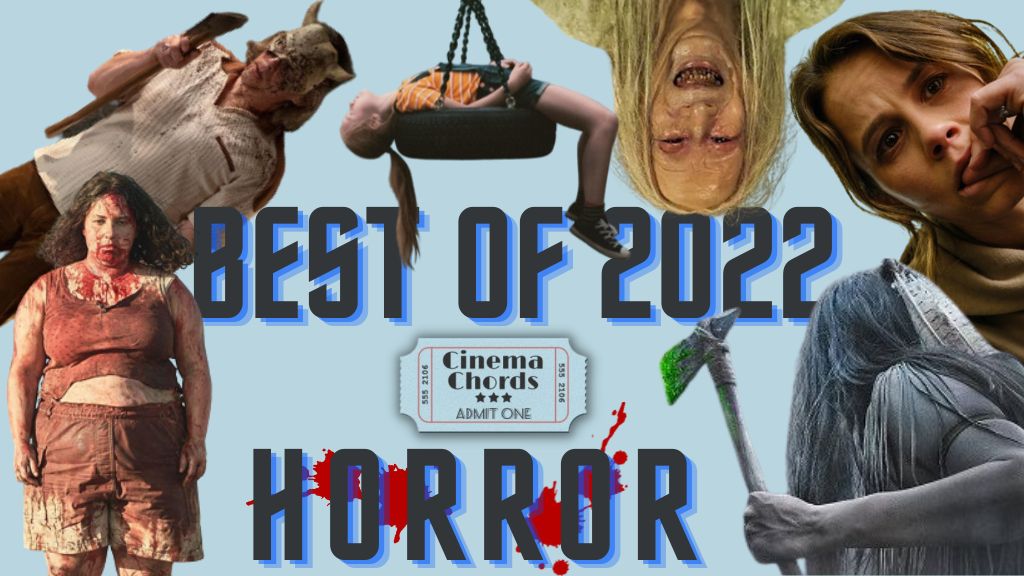 As 2022 comes to a close, there’s no question that we’ve been spoiled with a staggering horror spread this year. As tends to be a tradition, this year has not been solely dominated by Hollywood blockbusters (although horror blockbusters have enjoyed one of its strongest years in 2022), with audiences having been spoilt rotten with a vast assortment of indie hits (many of these finding a home at Shudder) that squeezed every last drop of blood out of their limited budgets, with some of them, thankfully, even scoring limited theatrical runs.

With that said, let’s dive right in with CinemaChords’ top 10 horror films of 2022.

We’ve all heard the horror stories: the sleepless nights, the weapons-grade diaper content, and the drastic life changes that come with bringing a child into the world. But, despite all the hardships that every child brings with them, most parents agree that having a baby is simply the single best thing that can happen to anyone. Parenthood is always going to be an arduous task, but one can’t even begin to imagine what life would be like if your seemingly innocent and curious bundle of humanity suddenly turned into something far more sinister?

This is exactly what Academy Award® nominated writer Eskil Vogt‘s supernatural shocker The Innocents addresses as a group of children suddenly reveal their dark and mysterious powers when the adults aren’t looking.

The film revolves around four young children who become friends during the summer holidays. When left to their own devices, they discover they all possess special powers. Being the curious kids that they are, as they explore their new abilities in the woods and nearby playgrounds, their innocent fun and games soon turn into something downright disturbing when terrible things start happening to the few local residents still in the area over the course of the holidays.

A critical hit at the Sundance Film Festival, Carlota Pereda’s story of Sara, an isolated and misunderstood teenager at the mercy of a particularly vicious group of bullies is a bold and strikingly ominous adaptation of the filmmaker’s award-winning short film of the same name.

Persecuted because of her size, and accustomed to her space in the margins of society, Sara faces a grueling dilemma when one of the girls who bullies her is kidnapped by a violent stranger. The film stars an exceptional Laura Galán alongside Richard Holmes, Carmen Machi, Irene Ferreiro and Camille Aguilar.

The film introduces audiences to Margaret (Hall), a woman living a perfectly successful and organized life, perfectly balancing her busy career with the demands of being a single mother to her fiercely independent daughter, Abbie. But despite having managed to balance everything until now, Margaret’s meticulous balancing act gets thrown completely out of whack when an unwelcome ghost from her past, David (Roth), suddenly resurfaces, dragging the horrors of Margaret’s past with him. Grappling with a spiraling fear, Margaret musters the courage to stand up to face the monster she’s spent the last two decades hiding from, who has come to settle their unfinished business.

Resurrection provokes sensations of chaos one minute and the deepest sense of familiarity the next.

Finally, 35 years after “Get to the Chopper” et al. became pop culture quotes, filmmaker Dan Trachtenberg (“The Boys,” “10 Cloverfield Lane”) has crafted a franchise best-in-show successor, breathing ingenious fresh new fluorescent green blood into the saga. This is the first time watching a Predator sequel left our chins chafing against the floor in awe just like the original film did when we first saw that as a teenager.

Audiences are in for an intense, visceral, terrifying, and aspirational ride, rife with moral takeaways, and I, for one, hope that Trachtenberg gets a chance to stick around for another entry as Prey is exactly the kind of mold breaker the franchise, and fans, sorely needed.

Derrickson’s latest has all the makings of the next possible horror franchise for Universal and Blumhouse, and we’d be totally up for that.

Penned, directed, produced, scored, and edited by Toby Poser, John Adams, and Zelda Adams (The Deeper You Dig) – who also star, alongside Lulu Adams, Hellbender is the sixth feature released under the Wonder Wheel Productions banner, the family-run company founded by Poser and Adams and their children. And as if those weren’t enough super skills already, the family also produced the music for the film providing tracks from their experimental punk band H6LLB6ND6R.

The film tells the coming-of-age tale of 16-year-old Izzy (Adams), who suffers from a rare disease that has kept her cooped up in the confines of a mountaintop home with her mother (Poser) since birth. Hitting adolescence, Izzy’s inquisitive mind starts to question her condition, prompting her to rebel against her confinement and secretly befriend Amber (Lulu Adams), another girl living on the mountain. But Izzy’s newfound happiness is short-lived when she eats a live worm as part of a game that triggers an insatiable and violent craving inside her. In order to make sense of her new urges, Izzy will have to learn the dark secrets of her family’s past and the ancient power of her lineage.

As we keep reiterating, Shudder’s lineup of horror, thrillers and the supernatural just keeps on thriving from strength to strength, and another testament to this is writer and director Travis Stevens‘ (Girl on the Third Floor, Jakob’s Wife) third feature film, the humorous, mind-bending serial killer shocker A Wounded Fawn that took Tribeca Film Festival, FrightFest London and Fantastic Fest by storm earlier this year, and rightly so.

Inspired by surrealist art and Greek mythology, A Wounded Fawn follows the story of Meredith Tanning (Sarah Lind – Jakob’s Wife), a local museum curator who is dipping her toe back into the dating pool. But, of all the fish in the sea, she ends up in the crosshairs of a charming serial killer (Josh Ruben – Scare Me, Werewolves Within). When a fateful romantic getaway between the two becomes a tense game of cat and mouse, both must confront the madness within him.

Parker Finn‘s feature directorial debut, the psychological shocker, Smile is undoubtedly the most talked about horror movie of the year, one that reminds us that life’s too short and we all need to remember to smile while we still have teeth…

Shocking audiences around the world and renowned for receiving trigger warnings from genre festival programmers who had never before felt it necessary to use such labels, The Sadness finds the city of Taipei suddenly erupt into bloody chaos as ordinary people are compulsively driven to enact the most cruel and ghastly things they can imagine. Murder, torture, and mutilation are only the beginning… A young couple is pushed to the limits of sanity as they try to reunite amid the violence and depravity. The age of civility and order is no more.

Whilst filmmaker Ti West first made a name for himself in the horror genre, the filmmaker branched out somewhat after 2013’s The Sacrament, when he went on to direct Ethan Hawke in the Western Thriller, In a Valley of Violence. Since then, he’s dabbled in a wide range of TV shows, including “Wayward Pines, “The Exorcist” and “Them” but things came full circle and he’s in just as fine form, if not better, with the release of X.

Bull, Barbarian, Speak No Evil, Hatching, Something in the Dirt, What Josiah Saw