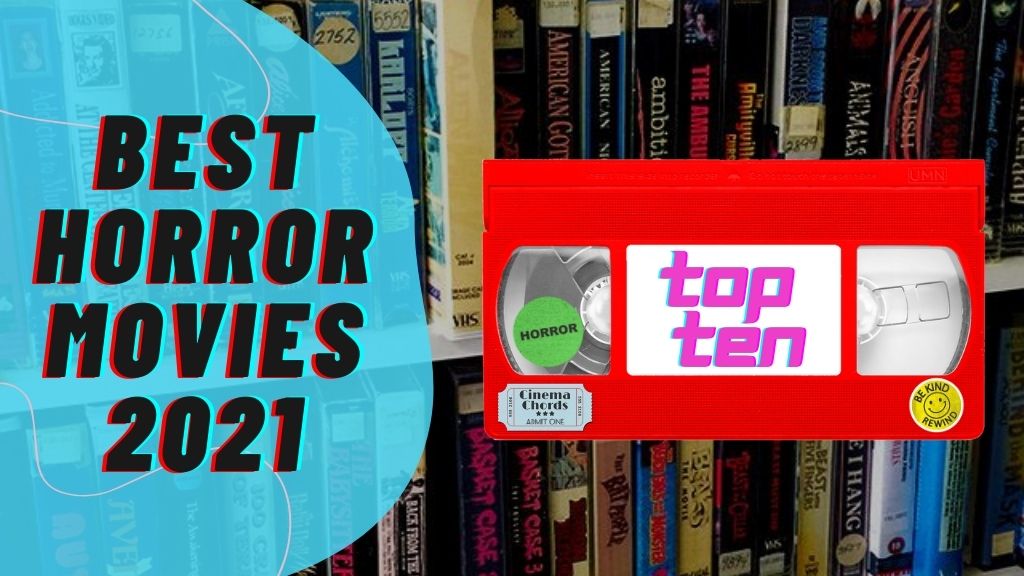 As 2021 draws to an end, it’s safe to say it’s played host to an amazing array of horror fare. As per usual, this year has been anything but just about Hollywood blockbusters, as audiences have been treated to a wealth of surprise indie hits that came out of nowhere which made the absolute most of their extremely limited budgets, with some thankfully even managing to make their way to cinemas for limited runs.

So, getting straight down to business, what follows is CinemaChords’ top 10 horror movies of 2021.

Smartly scripted and guaranteed to provoke debates long after its climax, the film features a sublime turn from Katja Herbers (“Westworld”, “Evil”) as a newspaper columnist and author suffering not only from writers’ block but a torrent of abuse and death threats on social media. When she discovers that her next-door neighbour is one of the anonymous people posting vile comments, she snaps and sets out on a mission: To track down all the trolls and deliver some swift, polite and deadly vengeance.

Best described as Die Hard meets The Texas Chainsaw Massacre, Bloody Hell puts a whole new spin on the action/comedy/horror formula, following Rex (Ben O’Toole), a man with a mysterious past who ups and leaves the country to escape the living Hell he’s created for himself… As bad luck would have it, he picks a destination that is far worse. In an effort to survive his new predicament, he turns to his personified conscience to help him figure out how to free himself from a deranged family of cannibalistic psychos.

James Wan’s horror genre homecoming tells the story of Madison, a woman paralysed by visions of grisly murders, and her torment worsens when she discovers that these waking dreams are, in fact, terrifying realities.

Whilst Malignant might not be as terrifying as most of his previous horror outings and shared a lot of aspects that felt all too familiar, having previously seen Black Fawn Film’s Let Her Out, Wan’s return to the genre still delivers in terms of gory thrills, an entertaining, albeit foreseeable twist, and some unexpected all-out action moments.

Edgar Wright‘s spectacular and very different return to the horror genre is a psychological thriller about a young woman with a passion for fashion who is mysteriously able to transport herself back to the 1960s where she meets her idol, a dazzling aspiring singer. But the London of that era is not what it seems, and time itself begins to unravel with grim consequences?

Gone is most of the comedy we recall from Wright’s earlier horror movies but the more stylish and more ambitious nature of this film gave it the edge, despite losing its way a little towards the end and failing to really keep its poker face.

Boasting what I consider the filmmaker’s most inspired final twist since The Sixth Sense, M. Night Shyamalan provided audiences with a chilling and satisfyingly contemplative thriller about a family on a tropical holiday who discover that the secluded beach where they are “relaxing” for a few hours is somehow causing them to age at an alarming rate – reducing their entire lives into a single day.

Adapted from the 2010 graphic novel by writer Pierre Oscar Lévy and artist Frederik Peeters, “Sandcastle”, Shyamalan explained how making this film gave him the opportunity to work through many anxieties he had concerning death and aging. This is apparent throughout the film and is sure to have you contemplating the aging process and how little time we have on this planet, making it one of his most powerful films to date, at least for this writer.

Horror fans were treated to a triple-treat with this three-week Netflix horror event, helmed by Leigh Janiak (Honeymoon, “Scream”), based on three scripts adapted from R.L. Stine’s best-selling horror fiction series of the same name.

Boasting a huge ensemble cast, the Fear Street trilogy wears some of the greatest eras of horror movies proudly on its sleeves. Sharing some of her key influences, Janiak said: “For 1994, Scream stood above all rest – it’s peak ’90s horror and, I think, one of the most brilliant movies ever made, period. Then for 1978, I got to look at the heyday of slasher films — Friday the 13th, Halloween, Nightmare on Elm Street. For 1666…I found the best inspiration for me lay in the beautiful world made rotten of Terence Malick’s The New World.”

The Fear Street saga first transports audiences back to 1994, when a group of teenagers discovers that a succession of terrifying events that have haunted their hometown of Shadyside, Ohio, for generations may all be linked – and that they may be the next victims. As the secrets behind the town’s curse are revealed, the trilogy traces Shadyside’s sinister history back various generations to 1666.

Hot on the heels of the smash-hit success of his previous film on Netflix, The Ritual, David Bruckner hit the ground running this year with his second solo-directed feature, The Night House.

This powerful, offbeat take on traditional ghost stories follows Beth (Rebecca Hall) who, after the unexpected death of her husband, is left alone in the lake house he built for her. She tries to hang on to her marbles, until her dreams strike hard: haunting visions of a presence in the house beckon her, but daylight erases any evidence of her visions. Acting against her friends’ advice, she starts digging through her belongings, in search of answers. And what she finds are bizarre and terrifying secrets and a mystery that she refuses to leave unresolved.

In Titane, Julia Ducournau’s highly anticipated follow-up to the wonderful Raw, a young man with a bruised face is discovered at an airport. He claims to be Adrien Legrand, a boy who disappeared 10 years ago. For his father, Vincent, this is the end of a long nightmare and he takes him home. At the same time, a series of horrific murders are taking place in the region.

This terrifyingly provocative and sui generis film once more serves testament to Ducournau’s uniquely haunting approach to filmmaking. Fittingly, the film took home a plethora of awards including the Palme d’Or for the Best Film at the Cannes Film Festival, the Audience Award at the Toronto Film Festival (Midnight Madness), and the National Board of Review (NBR): Best Foreign Film of the Year.

Having grown up on a healthy diet of ’80s horror movies, writer and director Prano Bailey-Bond found fascination in the aforementioned social and political aspects that plagued violent and graphic productions in that particular era. And, on exploring her curiosities surrounding the responsibilities that film censors’ were suddenly burdened with in the ’80s – having to be both objective and subjective in their roles all at once – the filmmaker felt compelled to convey her findings in the form of her very own horror film, Censor.

Penned by Bailey Bond and Anthony Fletcher, the film stars Niamh Algar as Enid, a fastidious film censor who takes pride in her duty to protect unsuspecting audiences from the deleterious effects of watching the mutilations, cannibalism, gang rapes, gore-filled decapitations, and eye-gougings she pores over.

Her scrupulousness is amplified by the guilt she feels for being unable to recall details of the long-ago disappearance of her sister, recently declared dead in absentia. But, when Enid is assigned to review a disturbing film from the archive that shares mysterious parallels with her clouded childhood memories, she begins to unravel how this eerie piece of work might be tied to her past.

Questioning and confronting gender narratives by flipping the rape-revenge sub-genre on its head and dismantling the problematic notion that revenge somehow makes you whole, Madeleine Sims-Fewer and Dusty Mancinelli’s unflinching feminist revenge fable dissects gender politics, selfishness, and abuse of power whilst exploring the complicated nature of trauma within families.

Sims-Fewer delivers an uncompromising central performance as Miriam, a woman on the brink of divorce who returns to her hometown in the hope of finding solace in the comfort of her younger sister and brother-in-law. But one night, a tiny slip in judgement leads to a catastrophic betrayal, leaving Miriam shocked, reeling, and furious. Believing her only recourse is to exact revenge, Miriam takes extreme action, but the price of retribution is high, and she is not prepared for the toll it takes as she begins to emotionally and psychologically unravel.

THE BOY BEHIND THE DOOR