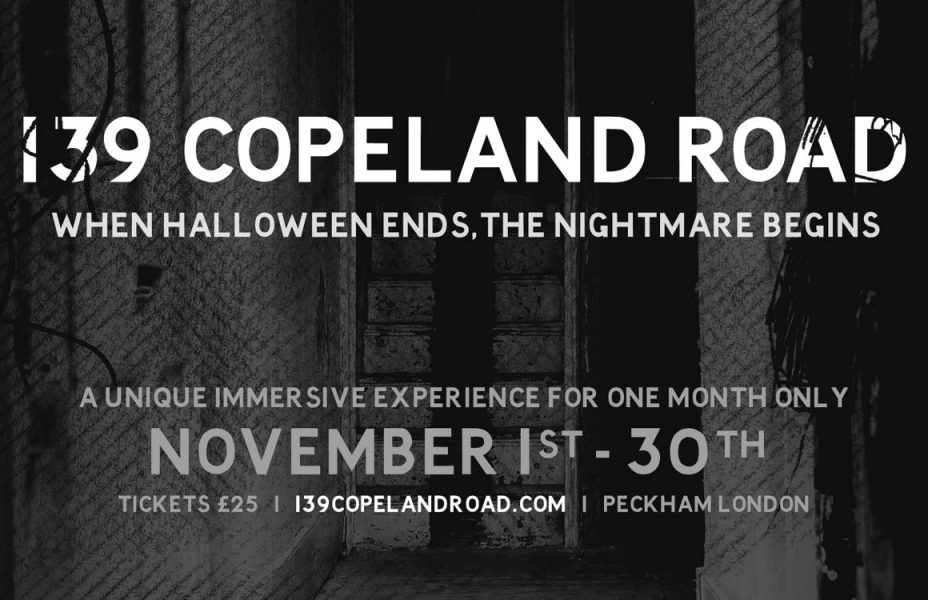 With a friend in tow, I took a trip to 139 Copeland Road in Peckham to experience an hour-long immersive horror experience. Other than knowing that I would partake in a séance with a medium in the hope of connecting with the ghosts of the past, I had no idea what I was getting myself into. As a lover of horror, it was something I wasn’t going to say no to, but I’d be lying if I said I wasn’t feeling a little bit nervous…..

Upon arrival we met a few more folk who were looking to join in the fun and had a group of 6 in total. Plus Michael, a researcher who has been delving into the past of 139 Copeland Road and a Medium, who desires to contact the spirit of a past resident called Mary Collins. Mary Collins died in a mysterious fire along with her two children in 139 Copeland Road and it is believed that her ghost haunts the house. Spooky!

The initial introduction and description of the house’s past was a great little set-up that had everyone in the group looking a little bit fearful. We were given the opportunity to read about past séances in the house– real or not, who knows? –  which further increased the sense of dread around the group. Adding to the fact that house was freezing cold and lit by candles, this was becoming perfectly spooky.

I don’t want to spoil the experience for those who are planning to take a trip to 139 Copeland Road, but I will say that it is certainly not for the faint-hearted or those who are afraid of the dark. You will have to walk around a rickety old house where the lights mysteriously turn on and off with no explanation, forcing you to wander around by torchlight. Be careful to watch your step. It’s unnerving, because this is not a film. This is real. If you want to feel genuinely worried and paranoid about what’s lurking in the dark, then this is the event for you.

The show does well at escalating the tension from the time of the séance and the events that follow, but there were a few moments that were a little bit silly towards the end. It becomes slowly clearer that all is most definitely not what it seems, but this is a show and you should know that you’re going to be a victim of some simple audience manipulation.

If you want to feel like the star of a horror movie, then 139 Copeland Road is the place to be. It’s tense, unpredictable and genuinely unnerving; an experience to rival the scariest of horror movies.

You can visit 139 Copeland Road up until 30th November 2016. You can buy tickets for the end here. Check out the trailer below.