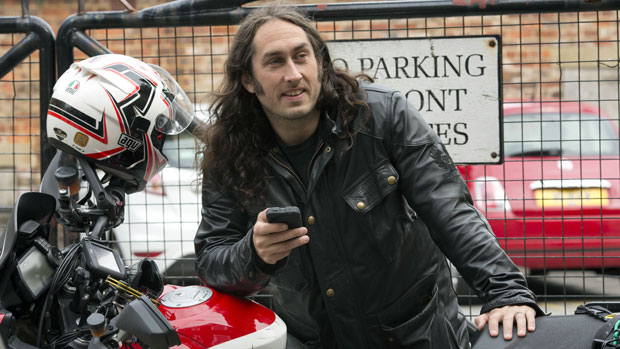 So we’re sitting in the very hip open-plan offices of UK TV in  Hammersmith and about to talk to the nation’s favourite hairy biker, Mr. Ross Noble about his brand spanking new, totally improvised TV show, FREEWHEELING. I’m mucho excited to be meeting a comedy bud and one of my all-time comedy heroes. So here we go…

RN: (laughs) Yeah, yeah. That’ll be worth a few quid in a bit. We’ll not be making them for long..

We’re in the Dave Room at UK TV. Describe the room for us.

Well, this is the original 18th century part of the building, historically. Then they’ve built all this open plan modern office around it. They’ve made a modern office fluorescent-lighted room look like an old mansion. It’s meant to look like those idents for Dave. But unfortunately, with these fluorescent lights you come in and think this is really relaxing, but it’s actually quite oppressive. (laughs)

Yeah, yeah. It’s the sort of place like in Eyes Wide Shut,  where you’d have some high class sex party.

Ooh (strokes leather sofa) It’s a bit early for that! There’s some stuffed animals on the wall, I get the impression from the clips in your new TV show, Freewheeling, that you’re an animal lover.

What? Really? Why? Do I mention animals a lot..

He’s not a real animal. 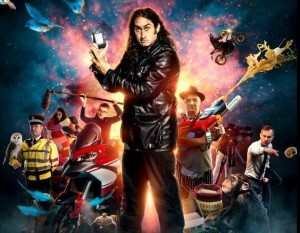 How about the.. erm…camp squirrel?

Again, not a real animal. All ornaments. Although in the opening credits there is a monkey trying to use a typewriter and a policeman holding an owl. I deliberately chose those shots for the opening sequence because I have a bit of an obsession with monkeys and owls.

Isn’t there something about the all seeing owl in security services?

Right, let’s get to Freewheeling, which I totally loved. I watched it and I pissed myself laughing.

My husband heard me laughing and shouted “What are you doing?” I said “I’m in bed with Ross Noble watching his new TV show!” It has been described as a sort of ‘anti-travelogue’. Don’t you like travelogues?

No, no. What it is, it’s a TV show but it’s a completely improvised show. All TV shows, even shows that appear to be loose are very heavily planned. I can’t think of another show like this. Everything you see in this show is real, nothing’s set up, we never do anything twice. If we miss the shot, we miss it, that’s it. I get suggestions off Twitter, then I get on my motorbike and ride there and when I get there, we turn the cameras on and start improvising the programme. It can be anything I want it to be. It can be a hard-hitting documentary about Lesley Joseph who’s in one of the episodes.

Oh, I worked with her once. Years ago in my distant past..

She caused us a bit of problem in a café so I go and find out what happened and re-enact the scene. It can be a Roger Cook style investigation show. It can be basically whatever comes out of my head. That becomes the show, but at the same time it’s also a way of kind of deconstructing the way telly’s made ‘cos you see it unfolding before your eyes.

Yes, there’s travel in it but unlike a travelogue where you go and visit touristy things, there’s no views in this show. It’s all in car parks and motorway services and alleyways and inside people’s houses. At no point do I say “Look at this amazing view of the Peak District”.  It’s “here we are in a car park in Swindon. Where am I now? I’m in a factory that makes hot dog vans”.

It’s sort of a “make it up as I go along” show, deconstructing the way telly’s made but at the same time it’s just an excuse for me to dick about in front of the camera.

You ride a motorbike in the show. Have you always been into motorbikes?

I got into bikes when I first moved to London. I bought a 50cc ‘twist and go’ scooter and just started riding to all my gigs. It wasn’t like I went, “Ooh I want to be a biker”.  I just wanted to get around without getting the tube or the bus and I was coming back really late from places and didn’t want a car. I hated getting on the night bus, cabs were a bit expensive and so I rode that bike for a while and thought I should probably get a proper bike licence. So I got a proper bike and got bitten by the bike thing. The bikes got bigger, and I started racing and stuff like that. When I’m on tour I try and do as much bike riding as I can.

There’s a bit of an Easy Rider thing going on here… Do you have a soundtrack playing in your helmet when you’re on your bike on the way to.. erm.. Woodall Services?!

(laughs) I listen to audio books, I have one ear piece that goes to podcasts and things. I listen to Radio 4 and stuff like that.

(more laughter) I was expecting you to say AC/DC up to volume level 12, not Stephen Fry!

I’d rather listen to an old man talking about coppicing. I listen to 5 Live as well…

So back to the TV show… All your suggestions come through Twitter. I understand that it was Eddie Izzard who first got you into Twitter. Were you not a fan before? 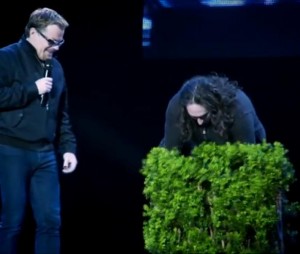 Well, no I didn’t do social networking before. I didn’t see the point of it. I felt like it takes you away from living in the moment, you know. You’re pissing about with your phone and all that. Eddie got me into to all that. Eddie’s in the first episode of the show. Someone tweeted me that he was in at the NEC in Birmingham so I went and gave him a small hedge!

As you do! It’s very funny how you appear from behind the hedge and then proceed to muck about on stage with Eddie during his sound check.

Yes. We’re stood chatting over a hedge… we’re talking over a miniature hedge in an arena!

He’s a bit of a visionary Eddie. He’s all about embracing new things, he’s always pushing.. er and he gets really passionate about things. He said, “You’ve got to do the Twitter”. He pointed out that a newspaper is lucky if it sells 100,000 copies so once you get say 100,000 people on Twitter not only are you directly talking to people, but to people who actively want to hear what you have to say. At first I was like, “I don’t want people to be able to talk to me. I don’t want to be accessible.” He sort of forced me into it and said “see what happens”.  After a while, I started to try and work out ways I could play around with it. I did a thing where there was an MP who was the government’s social media correspondent person, so I got all my followers – anonymously so she didn’t know it was me – to send her ridiculous questions and she got into it and started responding. ‘Cos of that, it made it into quite a few papers you know the fact that the Twitter minister has been tested blah blah.. and so I got stupid things trending. I got “#NothanksBillyOcean” trending at no. 2 worldwide.

When the going gets tough…

Yeah! So I was playing around with ways to use Twitter to have a bit of fun and experiment and this show [Freewheeling] is the next logical step in that.

(The very nice lady from Dave comes in)

Lady from Dave: Time for one more question.

One? I was enjoying it so much I’ve lost track of the time!

Ok. I read somewhere that there’s a tradition in your Edinburgh shows that the front row take their shoes off and put them on the stage. What can you tell about a person by their shoes?

Well, how much their feet stink when their shoes come off. That just became a bit of a thing in my live shows. People leave stuff after the interval in my shows. When I come back on stage people leave weird gifts for me.

What’s the weirdest gift you’ve ever had?

Well the best one I ever had, somebody left a fully tailored bubble wrap suit. I put it on but I couldn’t stop popping it.

Fantastic! Is there a tweet in the show you received you wish you hadn’t done or responded to?

Nah. Never regret, always look forward… “Vietnam never happened, drive on”. That’s what Johnny Cash said. My philosophy is that if you’re in a bad situation the more horrendous that situation is at the time, the better the story later on.

I couldn’t agree more. If Eddie Izzard needs a mayoral running mate, I can think of someone for the job!!

Cheers Abi. See you on the circuit!

Keep up to date with Abi Roberts at her official site or over on Twitter.

Tickets go on sale: Friday 8th November at 10am 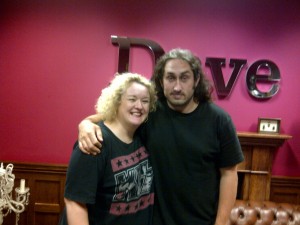 In this article:Freewheeling, Ross Noble