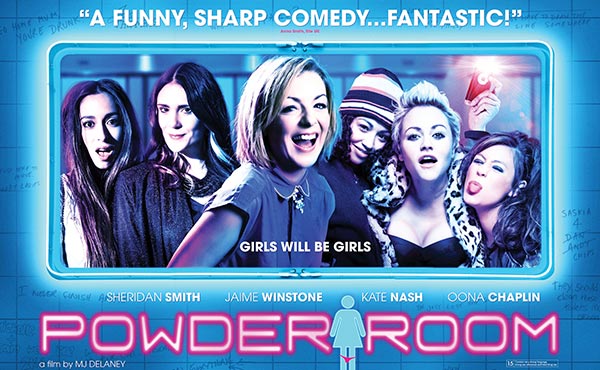 Powder Room is a no holds barred tale of a raucous night out – all set in a women’s toilet in a London nightclub. It stars Sheridan Smith, Jaime Winstone, Oona Chaplin, Riann Steele and singer Kate Nash. Cinema Chords met with the film’s director, MJ Delaney – young, talented and driven, she’s certainly someone to watch out for. Alongside her was Jaime Winstone, who proved to be smart, funny and outspoken. The pair made for fun company in a suite at London’s Corinthia Hotel, as they discussed what exactly happens when women have to ‘pay a visit’.

How did the project come about?

MJD: I met [producer] Damian [Jones] in June/July last year. He had this locked box money from [his earlier film] The Iron Lady and he was one of the first producers to get it. When the Tories axed the UK Film Council they introduced this very capitalist alternative. I think out of the five producers, everyone else put it into development and he was like, “I’m going to make a micro budget feature with it.” I met up with him. He gave me the script for When Women Wee, which is the play that the film is based on. I read it and I was like, “This is hilarious. This is great.” And then in September he rang me and was like, “We’re doing it, we’re going to shoot it in November.” But at that point the only script we had was for the play which was just a series of vignettes in the toilet. It didn’t have any central storyline. None of the main characters, or the relationship between them, really existed. And so we had to develop the script in tandem with the pre-production. Then Andy [Brierley] and I were simultaneously casting characters that were being cut. It was mental. And then we had to finish it all for Cannes in May because Damian wanted to sell it – which he did, to Universal.

Jaime, how closely do you associate with Chanel’s self-confidence?

JW: Not that close, to be honest. When I first read the script she just leapt off the page and I absolutely fell in love with her. I thought, it’s the first time I’ve read a really strong female character who’s confident talking about sex, who’s confident in herself, and is not a bad person, and is actually very warm. I just found that really inspiring and endearing. I just really liked her. Found her funny and realistic as well. I liked the idea of playing someone like that. As women we’ve all met girls like this who are hopeless romantics who think they’re going to meet the man of their dreams behind the bar whilst pouring a White Russian. In the real world it’s maybe not gonna happen. But she holds out for that. She believes in it and I just really love that.

MJ, you’re in excellent company – Sidney Lumet also shot his first feature, Twelve Angry Men confined to a single location. Could you tell us about the pros and cons of filming in a single location?

MJD: I think the pros were, considering that we had the tiniest budget in the world, it was the only way we were going to be able to make a film on this money. I think the cons are trying to make it filmic. If you take a play and turn it into a film, the first instinct is to put it in multiple locations. It’s the easy way to make it more like a film. So that was the challenge. But it was quite nice. It forced a focus. In terms of what I wanted to do aesthetically it was all kind of tied in to how can it feel like a bigger space than it is. How can we make this four-walled box more interesting than just this one room that we’re stuck in for the whole night? So I guess in that respect, with all the ideas you’re thinking of, are brought round to this one central dilemma.

How free did you allow your actors to be? Did you try out any improvisation or was it all very much in the script?

MJD: We were so up against it in terms of time and schedule that we didn’t have a huge amount of time to experiment or be free with it. It was tight. I was so delighted with the cast that I had that I was so confident in every single one of the girls. Not only how good they were but how much they loved the characters they were playing. I largely just left them all alone and they did an amazing job.

JW: We blocked it out and knew where we were going with it. MJ would be closely watching us and would be like, “Go. Go with that.” or “Actually that’s really funny, we should do that.” And that really helped. We were just developing it and also still becoming them and it was just growing on set. It was great because it just felt like that was our intimate theatre space. We’d line up the camera and have a rough run. You know, piss about essentially. Excuse the pun!

Can you talk about working with Sheridan Smith?

JW: We loved it. We are super close and we are very similar. And she’s an amazing actress. She’s really, really inspiring to me. I watched her in this and she’s got so much range. And she’s such a down-to-earth beautiful girl and she’s fucking cool.

MJD: The chemistry between you guys was so natural. We were so lucky that we cast friends as friends – it’s such a shortcut! She has an ultimate likeability about her and a vulnerability.

And how about the Toilet Attendant – what was her purpose?

MJD: I like the supernatural element that we brought into it, it gave us a lot more licence to have fun. Which again, liberates you from this space a little bit. Johnnie [Fiori] had such a presence – a dignity about her that was always really important to me. She is so weary of everyone and despite the fact that you love all the characters, you’re always on her side. Even though Saskia and Paige are funny and you’re know they’re having fun when they’re being really fucking annoying, you’re totally on the toilet attendant’s side. You’re seeing it through her eyes.

JW: She’s the overseer of it all.

MJD: I like the bit when one of the young girls is crying and she takes her to her breast and still goes utterly unacknowledged by both of them.

Did you encourage the cast to do any preparation? For example, did you go to a nightclub together?

MJD: Riann [Steele] went to Fabric and watched a load of people off their faces on pills. Which I think’s one of the funniest ever pieces of research! But it’s not like it’s a period drama where you have to research. I think I can vouch for most of the cast and say, we’ve been there.

JW: I think any girl growing up in London has been in a situation where there’s a girl crying or you’ve had to help someone and hold their hair back while they’re being sick. All the boundaries go down in the toilet. You’re in there. You’re all getting ready. You’re all helping each other. You’re all advising each other. Someone’s having phone sex in one cubicle.

So is a level of fronting or a mask, so to speak, dropped when you’re in the ladies toilet?

JW: Of course. Of course. When women are in clubs you have to do certain things. When you go to the toilet you’re sorting your shit out. You’re getting your face on. Getting it together. Putting your front on and then you go out and you’re fine again. That’s what’s quite amazing about women in toilets. Because nobody judges anybody.

We’d like to thank MJ and Jaime for chatting to us and we highly recommend you catch Powder Room which hits UK cinemas this December 6th. To get you in the mood we’ll leave you with a trailer for the movie.