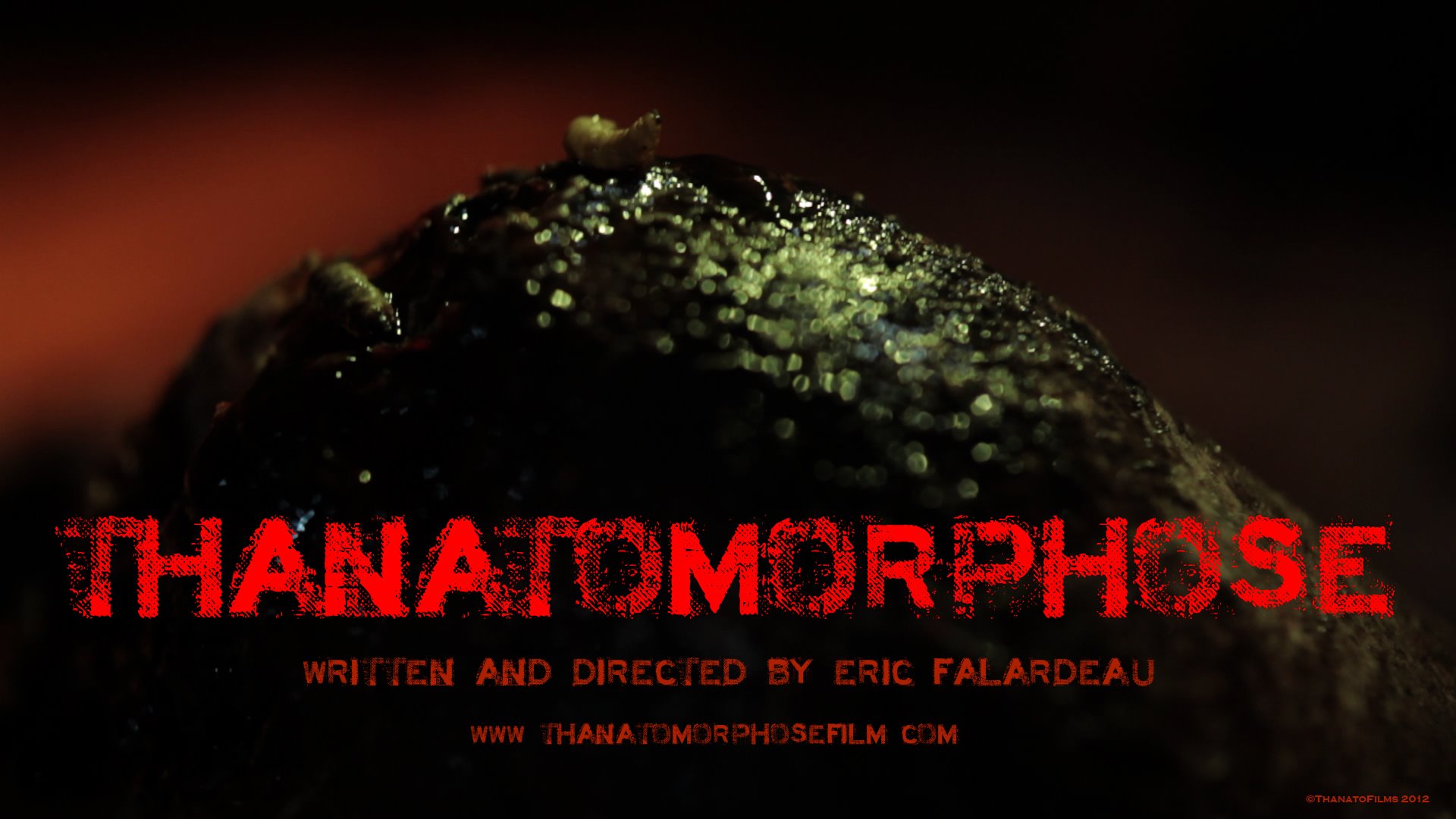 2013 has been a fairly dull year as far as commercial cinema is concerned, with the typical lacklustre blockbusters and all too predictable Oscar bait. That being said, it’s been a rather interesting year in regards to alternative and independent cinema. That statement certainly extends to Eric Falardeau’s harrowing horror Thanatomorphose.

Thanatomorphose follows a girl who suddenly begins to decay for unknown reasons, as she’s pushed to try and savour her last few days as her body slowly rots. The film is remarkable in its use of pacing and temporality. It intends not to scare the audience, but to make them wait, to make them observe the gradual, mortifying process. Thanatomorphose isn’t a film about cheap scares, which is a departure from the recent trends of the horror genre compared to the likes of Insidious Part 2, or Carrie.

Fortunately, we were lucky enough to sit down and have a chat with Thanatomorphose director Eric Falardeau about his time writing, directing, and creating his intriguing film.

Ultimately, Thanatomorphose is a film about disease, and how it leads a girl to gradually decomposing. That’s quite an ‘out there’ and fundamentally different idea. How did that idea first develop for you? Did you have any immediate inspirations from other films or sources?

Well in fact, it’s quite simple. I was working at the university, on my thesis, which was about body fluids, porn and gore. So I had to watch a lot of movies, I started thinking about texture in horror films, and body fluids. How important body fluids are for the horror genre, with that slowly but surely the idea came out, about the idea of a girl rotting. It was a film about the body and that’s why I was interested. I was reading myself, as I always do, and so I meshed these feelings of despair from literature to the science behind it and it came together. As the saying is, write about what you know, and so I did. Thanatomorphose is kind of a mix of all these things.

Would you say Thanatomorphose is in some way a moral tale?

Horror films for me are movies where you can express things, that you can’t in other forms of film. The body is your primary tool, you can talk about relationships with people, relationships with yourself, how you react to stuff, and our fears as a race. I wasn’t interested in generic fears like dying from some monster, but sickness, death, and these mundane fears that are rational. For me, Horror films are not the most interesting on a generic level, but to use the possibility of the genre to ask questions about life is what interested me.

Was your lead actress at all squeamish about her transformation, especially considering the use of maggots? 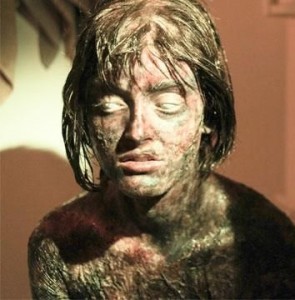 I have seen her in short films before and that’s where I found her. I was just like, she’s perfect, and she’s from Montreal but she’s American. She was perfect for the role, from what I’ve seen in the short films. Her eyes, her look, everything I’ve seen from those short films. It was just a matter of having her on-board. Part of the difficulty was in the sex-scenes, because I wanted to get them right, get them graphic, and the second part was how the special effects worked. Some days it was 6 of hours make-up, and we wanted to film it chronologically, so we can see how tired she is, as it progresses. Her natural fatigue would tie in to the make-up process. To answer the question more directly, she was definitely grossed out by the gooey stuff, but I was involved in it all. So I try to get the best from my actors, as we’re all in it together. The worms were definitely not ideal, but we got through it.

So what specific kind of effects did you use? Obviously there’s a lot of that involved when it comes to horror, how did you approach the need for SFX and make-up.

First, I did some research about the rotting process. Going to medical school, reading books, watching demonstrations, pictures. I also went to a lab in a school, to see some things, to see how it works. I made a list of all the different details of the rotting process, that you could adapt to movies. When we sat down with the SFX make-up artist, we went through that list and through the script. I went into that meeting wanting mostly practical effects. Not to say that we were making stuff like the old days, but we wanted that practical texture that comes with practical effects. So simply, we planned 3 different styles of make-up, for 3 different phases of her transformation in the movie. The first make-up was simply stage make-up, the bruises, cuts etc…For the second part we had prosthetics, bladders, more elaborate things. Finally, we had the full body-suit, with stop-motion technology for the final shot. So we used 3 different styles for that. The only SFX we used were the last ten minutes, when she didn’t have a nose, as obviously, with make-up you can mainly add stuff, as opposed to retracting it, so that was necessary. Hellraiser was definitely an influence for me. I like effects, where you can feel the effect on screen, the texture, the stickiness.

What was your intention as far as the audience goes? To disgust and repulse in true horror fashion? Would you say there’s more meaning beneath the gore, and death?

Well in fact, I wasn’t surprised people felt disgusted, because it wouldn’t have been truthful to the subject to not shoot or include that stuff. If you shoot a film where a girl rots, and you don’t show it, that’s missing the point. It’s also about her journey, her journey watching this happen to her.At the same time, a lot of people not even horror fans, claimed it wasn’t as bad as they thought it’d be. Simply because it’s not all about that. It’s very gradual. Most of the audiences knew what would happen, since it’s obvious. But that slow pace allows people to focus on what the film is really about. Every shot is there for a reason, and the film is certainly representative of other things.

There’s a lot of themes in Thanatomorphose. One of which, is the inherent sexuality of the film. Would you say it’s intended to be an indictment of open sexuality or promiscuity at all?

For me, it wasn’t really about the sexuality. Obviously it isn’t explained why she started rotting. For me it’s not important, it’s how she connects with herself, and reacts as a response to this. She starts to live again, even though it’s too late for her. The rotting process for me was ironic, she’s already dead in her life, it forces her to start living again. There’s a parallel with people, and how they wander aimlessly through life, not feeling, not doing. Sex in the movie, is another way for the body to express itself. When I did research about terminal illness, and the steps people go through, one of them is that libido is an element of that. One way of fighting death is reproducing life ourselves. It’s a mirror of that, sexuality as a way to reconnect with herself, and then to react with what is happening. It’s not a message about bad/good sexuality, it’s just another mode of expression. There was no specific statement about sexuality, that I intentionally wrote into the script. Of course people will bring their own sensibilities into the movie, and that’s a quality I like in movies, when you can reflect your own opinion, let the viewer see the movie how they want to.

Could you tell us a little about any projects you’re working on currently?

I’m working on several projects right now, there are 2 feature projects I’m planning right now, one by myself, and one with my husband. Hopefully I’ll have made another movie by 2014, and 2015, but it’s finding the funding and such, both are a bit more ambitious than Thanatomorphose. Both aren’t horrors, but they have elements of horror, but they’ll be toned down in that sense, but the themes are certainly in that realm. I’m also working on short films. One is an experimental film about native Americans, another is a haunting sort of drama. That dark kind of atmosphere is me, it’s hard to fight in that regard. There’s also a book that’ll come out next summer, in Quebec.

We’d like to thank Eric for his time, whilst urging horror fans to watch Thanatomorphose which is available on DVD this month.